Katz Brothers is a unique, business with historic past 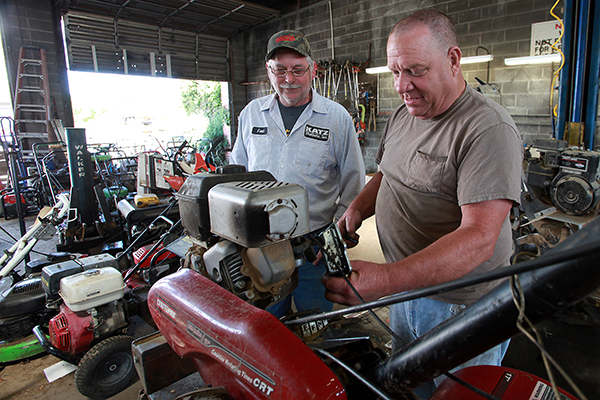 It’s not unusual to pass by the small, single-story brick building at the corner of Walnut and South Madison streets across from the Vicksburg Fire Department’s Central Fire Station and hear the high pitch whine of a string trimmer’s engine or the throaty roar of a V-8 coming from the open bay doors of the shop adjacent to a store inhabited by lawnmowers and other yard equipment.

Brothers Fred and Luke Katzenmeyer have been operating Katz Brothers, a combination auto shop and lawn and garden equipment sales and service business, on the south end of the city’s downtown area since 1995.

People walking into the shop are usually greeted by a smiling Fred, who stands behind the counter in the building’s home and garden section ready to help customers with measuring a lawnmower blade, find the right line for their trimmer or diagnose and tag a piece of equipment for repair.

Although the brothers have had the business for 20 years, the building, shop and equipment sales and services operation they took over from their grandfather, Fred Melsheimer, goes back almost 80 years. Their grandfather’s name is still on the building in large letters across the front.

“We all grew up working here when we were kids in high school,” Fed said. “We did anything we were told to do.”

But their early experience in the shop didn’t translate immediately into a career in the family business.

“I left here and went to college and was in the oil business for about 18 years as a geologist, then I went to work for the state as a state geologist,” Fred said. “Luke was the manager of the service department at Blackburn.

“When my grandfather was 91, he decided to retire. I quit the state, and he quit Blackburn, and we came and took over this.”

Fred, who spends most of his time in the lawn and garden section of the business, calls its management “a 50-50 deal.”

In the lawn and garden section, Katz Brothers handles walk behind mowers, zero turn mowers, and trimmers, blowers and chainsaws.

“We do repairs on lawn and garden equipment and stock parts. In the shop, we do everything in the auto side but frontend alignments and tires.”

A lot of people, he said, purchase their equipment at the big ticket stores “and they don’t think about who will service them. At some point, they’re going to have to be serviced. They come here for us to service them. We try to keep the parts in stock, but it’s almost impossible now with so many variations of everything.”

Fred said the biggest problem with the small engines for mowers and trimmers is the fuel, which in many cases contains ethanol.

“People put their mowers up (for the winter) and after three to four weeks, the gas goes bad. It turns sour,” he said. “The rest of the engines run great, but the fuel parts like carburetors and lines are affected.”

“You have to do something besides lawn and garden,” Fred said. “Because there’s nothing to do all winter. You have to have something else to do. You can’t do just lawnmowers and stay in business.”

He said a major problem he and his brother have is getting people downtown.

He looked through the front window of his shop and pointed to Walnut Street.

“That used to be Highway 80 out there,” he said. “People used to come off the bridge down through here and go to Clay Street to get to Jackson. When we were young, there used to be 18-wheelers bumper to bumper through the night.”

The street is quieter now, but the business remains the same. A few days ago, Fred said, people were packing the shop looking for new equipment and the parts and fluids to get their mowers and trimmers ready to go for the summer.

“We try to know our customers by name,” he said of the business’ longevity. “That, and I guess the (quality of) work we do.”