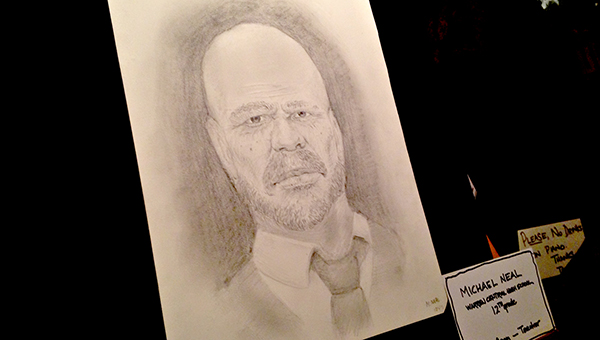 Though his true face has been lost to history, a portrait of Warren County’s first black sheriff now has a prominent place in local history.

More than 140 years after he was forcibly removed from office by an angry mob, a portrait of Warren County Sheriff Peter Crosby was placed in the lobby of the sheriff’s office alongside the long string of white men who followed him.

There are no known images of Crosby whose removal led to the Vicksburg Troubles of 1874, so the realistic drawing came from the imagination of Michael Neal, who graduates tonight from Warren Central High School.

“I was basically just thinking how back then everyone would be a little more rough and not as clean. I looked online for people back in that time to see their face, hair and facial hair and I combined all that together and got a really rough, hard looking man,” Neal said. “I would imagine he would look really rough.”

In February, Neal won a black history month art contest judged by Sheriff Martin Pace with the image he created of Crosby.

“Since we can’t find a photo of him, I’m confident this is what he looked like,” Pace told Neal during the portrait-hanging Tuesday. “This is a determined looking face. The expression on his face reflects someone who is on a mission.”

Crosby’s mission was one Neal said he was unaware of before entering the art contest.

As many as 300 people were killed in the fight that erupted after Crosby’s removal.

On Dec. 2, a “citizens committee” met to call for Crosby’s resignation, saying that his bond was not sufficient to serve as tax collector. Crosby went to Jackson to gain the support of Gov. Adelbert Ames, who quickly called for his return to office, calling the action of the committee “riotous and disorderly.”

Crosby, undeterred, drafted a handbill that was read in churches around the county on Dec. 6.

“My resignation was only caused by compulsion — the result of base coercion on the part of an armed mob of the most bitter and relentless of our enemies,” reads part of the handbill.

The next morning at the urging of Ames, groups of black men planned to march into the city and restore Crosby to his office.

A watchman on top of the courthouse spotted the first group marching in from Grove Street at about 9 a.m. Members of the all white citizens committee — both Democrats and Republicans — rushed to the courthouse to take arms and met the group of black men near the city limits.

Its unclear who fired first, but when the smoke cleared at least six black men lay dead on Grove Street.

At 10 a.m., a second group was spotted marching up Old Jackson Road. The white militia rushed to meet them in the very spot where the surrender of Vicksburg had been negotiated in 1863. Again, reports differ on who fired first, but the body count is recorded. One white man and 25 black men were killed.

The slaughter continued south of the city, and by 11:30 a.m. the organized killing was through, though historians estimate that at least 150 and possibly up to 300 blacks were killed later on Jan. 5 1875, when union forces under Gen. Phil Sheridan arrived to secure the city.

After their arrival, Crosby was returned to office. The next year, Crosby was defeated in an election and retired.

A congressional inquiry into the Vicksburg Troubles took two weeks, and Congressmen heard testimony from 115 witnesses.

The majority of the Congressmen found that the white militia was at fault and referred to them as an “insurgency” while admitting that the county has suffered through much misgovernment. There was, however, a dissenting report placing blame squarely on the blacks.