The embattled Mississippi state flag was born on a kitchen table in Issaquena County.

A dozen years later, it was inadvertently killed before being brought back to life almost a century after.

This symbol of sacrifice, war and a bygone era has shown it is resilient if nothing else in the last state to honor Dixie in its flag, even if it only has been officially in the state’s banner for a total of 26 years. 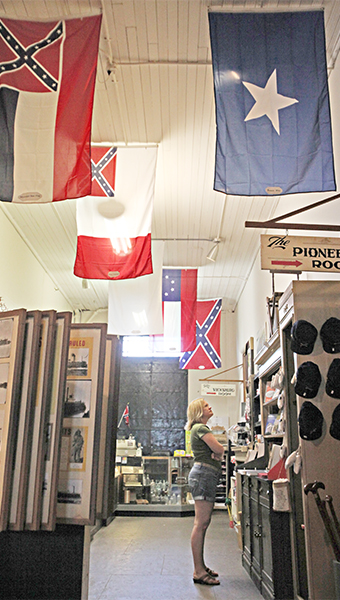 HISTORY OF THE FLAG: Historical flags hang in the Old Court House Museum depicting the flag through Mississippi’s history.

State Sen. E.N. Scudder of Mayersville, a colonel in a state militia group and the son of a Confederate veteran, designed the an amalgamation of the First National Confederate flag and the Battle Flag of the Army of Northern Virginia — in 1894 with memories of the Confederacy in mind.

“My father loved the memory of the valor and courage these brave men who wore the gray,” Scudder’s daughter Fay S. Corneil wrote to Eva W. Davis at the Old Court House Museum in 1955. “He told me that it was a simple matter for him to design the flag because he wanted to perpetuate in a legal and lasting way that dear battle flag under which so many of our people had some gloriously fought.”

Scudder’s wife saw the design when he returned home from the Legislature and began to construct the red, white and blue banner that would become the official state symbol.

“So the ardent Southerner that she was, she immediately procured materials and made the first Mississippi State Flag,” Corneil wrote.

But in 1906, the Scudders’ work was undone — at least legally. That year, Mississippi adopted a revised state code including a provision to repeal laws that were not re-enacted by the Legislature. The official state flag was among those.

The paperwork error left Mississippi without a state flag until 2000 when Gov. Ronnie Musgrove appointed a committee to draft a new proposed flag. The proposal kept the elements of the First National Confederate Flag — red white and blue stripes — but replaced the Confederate battle emblem with a circle of stars.

By a nearly 2-1 margin in April 2001, voters approved retaining the 1894 flag, ending 95 years of statehood without an official flag.

For the majority of its existence, Mississippi has been without a state flag. No banner was established when statehood came in 1817.

In 1861, the state unofficially used the Bonnie Blue flag as a symbol of secession. The flag — a single star on a blue background — had been the symbol of the short-lived Republic of West Florida and was symbolically used by Confederate states as a show of removing their star from the United States Flag.

It flew over Mississippi from January 9, 1861, until March 30, 1861, when the state adopted what has become known as the Magnolia Flag. That flag prominently features a magnolia tree on a white field with the Bonnie Blue in the right top corner.

The magnolia remained the state flag until August 1865 when legislators repealed actions taken at the state Secession Convention, returning Mississippi to a state with no flag.

It would take nearly 30 years — the total amount of time an official state flag has ever flown over Mississippi — for the new flag to be adopted.