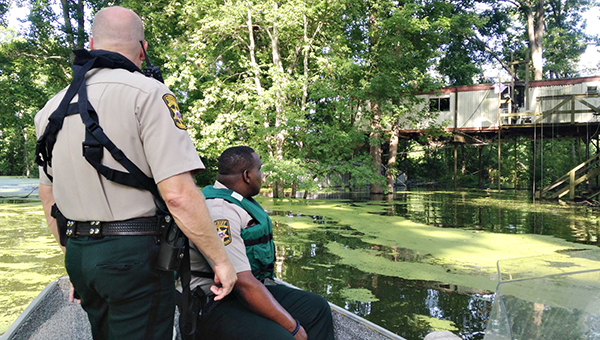 The Mississippi River at Vicksburg is at its second highest summertime level in recorded history as it, and though a crest is predicted for Saturday, floodwater isn’t going anywhere soon.

The only time the river at Vicksburg has been higher during June, July or August was after the Great Flood of 1928 when floodwaters took months to recede, National Weather Service Senior Hydrologist Marty Pope said.

“I think we’re running at some of the highest levels we’ve had for the summer months. I don’t remember anytime it’s been this high in recent years,” Pope said.

The Mississippi was at 45.34 feet Friday morning and is expected to crest at 45.5 feet Saturday.

“Once it gets there, it just sits there,” Pope said “The biggest threat right now is everything is fairly flat above there, and that’s not a good thing.”

Areas of Warren County between U.S. 61 and the Mississippi River were flooded this week.

“It’s not in any houses, but it’s got a whole lot where you can’t get to them,” Sheriff Martin Pace said while inspecting floodwater this week.

Water was over Chickasaw, Long Lake and Thompson Lake Roads. The Mississippi River overflow was too deep to drive through with a four-wheel drive truck but not deep enough to launch a boat.

At and Ziegler and Laney Camp roads in the Eagle Lake Community, water was about 8 feet deep and covered all but the roofs of carports. Yet, water was still far below the floors of elevated riverfront homes.

In the city, water up on Jackson Lane in the Ford subdivision, but houses and businesses once affected by flooding have been torn down.

Though the crest is predicted for Saturday, the river might not begin to fall for days or weeks, depending on rainfall in the Ohio and Arkansas river valleys.

“If this works out between now and Sunday, they show about 3 inches just north of St. Louis. There’s still that potential until we get a good fall at Cairo, Ill., that the river could turn back around if it does crest at this lower end. We’re going to have to keep an eye on this for a while. It’s not over yet,” Pope said.