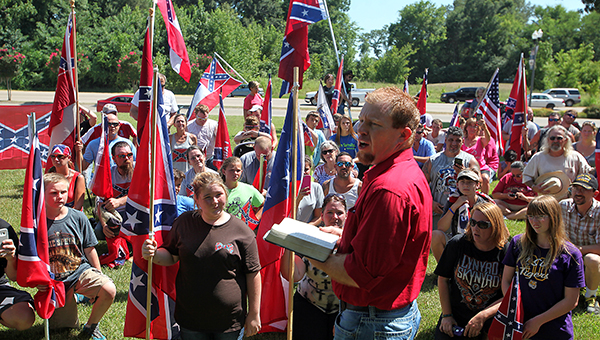 A MOMENT OF PRAYER: Andy Johnson leads a prayer Saturday during a Confederate flag rally at the Vicksburg National Military Park. (Justin Sellers/ The Vicksburg Post)

History, heritage and equality are reasons why some Southerners unite under the Confederate battle flag.

Yet two groups who said they were for race equality, stood divided by Clay Street Saturday afternoon.

A large crowd of Confederate battle flag waving people gathered at the Vicksburg National Military Park grounds to show their allegiance to the flag.

“We’re rallying to support our heritage and our history,” Dennis Lewis said.

Park rangers and Vicksburg Police estimate there were 150 to 250 people out waving their flags at the cars driving by on Clay Street. Many of the passersby honked their horns in support while others took pictures and video with their phones. A continuous loop of vehicles with their flags mounted drove by the gathered crowd as if they were in a parade.

People in the predominantly white crowd were adamant that racism had nothing to do with the Confederate battle flag.

“It’s not a symbol of hate or slavery, that’s what they’re trying to say about it, it means freedom,” Duffy Strawn said.

A group of six people, all black, stopped across the street from the national park to witness the display.

“All our grandfathers, great-grandfathers fought for this,” rally participant Daniel Clow said. “It’s something that’s in our blood, something we have to represent and something we got to defend. We can’t just let it go.”

Rally organizer Amanda Jennings, who changed her last name on Facebook because of death threats, said the rally originated because of the House of Representatives’ vote earlier this month to ban Confederate battle flags on graves at federal cemeteries.

“That’s what we’re uniting for, blacks and whites, Christians, everybody.”

As to why she has been getting death threats, Jennings has her theories.

“The media is race baiting, they don’t seem to realize it was the North versus the South, not black versus white,” Jennings said. “We had Confederate black soldiers, and they were free when they fought. They were united which is exactly what we’re going to have to be again.”

On the other side of the street, Jones said he was running an errand but the demonstration caught his attention so he pulled over to watch. He was disappointed they gathered at a national park that he jogs at everyday.

At 3:30 p.m. the Rev. Andy Johnson of West Monroe, La., said a prayer for the soldiers who were fatally shot in Chattanooga, Tenn. earlier this week.

“It doesn’t matter what side of the flag you’re on, that’s real heavy on everybody’s heart,” Johnson said.

The group was concerned with recent outcries around the country and the state of Mississippi to have the flag taken out of public use.

“The rebel flag, it means a lot to younger people because it’s rebellion,” Jennings said. “It’s not just whatever somebody has abused it for, it’s rebellion against government basically and them choke holding us and telling us we can’t pray.”

VNMP was prepared for the group and in preparation they brought in additional staff for traffic control, rented port-a-potties and had cold water available.

“They were courteous, they secured the permit just like they were supposed to and they were very well behaved while on site,”  ranger Ray Hamel said. “

“We welcome the opportunity to provide a forum for free speech and exercise their first amendment right,” Hamel said.

The group kept the peace and there was no retaliation or disturbance.

“We support the first amendment, but at the same time we’re going to make sure that not only are they safe, but the community as well,” Armstrong said.

On the other side of Clay Street, Seychan Lewis said he believes in freedom of speech and doesn’t want to take anything away from the rallying crowd, but he wanted to share his own opinion.

“The main people that try to tell black folks that we need to get over slavery, don’t want to get over the flag,” Lewis said. “That makes no sense.”