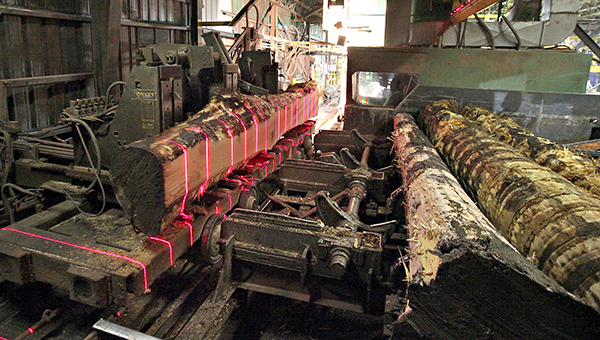 BIG THREAT: Lasers stripe a log on a machine that strips rough edges inside a sawmill at Anderson-Tully Lumber Company. A shiny green bug is posing a threat Mississippi ash trees.

A shiny green bug is posing a threat to one of Warren County’s biggest industries.

The invasive emerald ash borer has already invaded forestry operations in northern states. While it hasn’t shown up here yet, the pesky beetle is likely to show up in Warren County soon, causing massive destruction to timber and landscaping.

In Warren County, forestry is a $340 million a year industry, according to the extension service. Halting shipment of timber could be devastating.

The insect was introduced into North America sometime in the 1990s and began killing ash trees in Michigan in 2002.

“They bore into bark and introduce disease and other insects,” McCain said.

The ash borer has been reported as far south as Georgia and major infestations have occurred in eastern Tennessee, southwest Arkansas and parts of northwest Louisiana. Areas of all three states face a quarantine, meaning timber products could not be moved into or through nonquarantined areas.

Such a designation could be disastrous for hardwood production in Mississippi, which is on a list of states facing possible infestation in the next five years, according to the U.S. Department of Agriculture.

“It depends on how large the quarantined area was. If they quarantined the whole state like they have some other states, you could move that throughout,” said Anderson-Tully forester Norman Davis.

A quarantine could prevent the Anderson-Tully sawmill from being able to bring ash timber into Vicksburg, he said.

“Ash is a major species. It’s a valuable species,” he said. “It’s a serious issue for the hardwood landownership and sawmill industries.”

The shiny green beetle could already be making its way through Mississippi forests, Davis said.

“It’s in every state that touches us and that may be reflective of the effort that has gone into the effort of sampling for it as to whether it’s actually here or not,”  he said.

On Thursday, the Warren County Forestry Association will host Mississippi State University professor John L. Willis who will speak about the devastating effects of the ash borer, preventative measures and funding opportunities for tree replacement.

One of the preventative measures being used to save ash trees is essentially a vaccine that helps prevent infestations and diseases caused by the borer.

“It’s kind of like getting a flu shot,” said Extension Agent John Coccaro.

The pesticides are safe for the public though they typically require a license to apply, McCain said.

About 97 percent of forestland in Warren County is hardwood, including ash.

While ash wood represents about 5 percent of hardwood across the area but sales of ash lumber represented about 20 percent of the market’s value, Coccaro said.

Ash is also popular in landscaping and “probably has more value in that setting than in a forestry setting,” he said.

FUTURE PLANS: Portofino Hotel has closed and plans to reopen in seven months after major renovations are completed, including a... read more