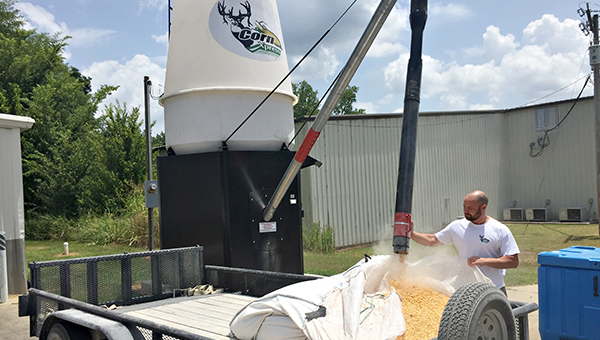 This concept is exactly what led registered nurse and avid deer hunter Chip Chisholm to develop Corn Xpress, a corn vending machine that takes cash or credit in exchange for 5, 10, 33 or 55 gallons of corn.

“About four years ago I came up with it,” he said. “It was nighttime, and I was wanting to put some corn out around my house to feed the deer.”

Chisholm said his friend had a grain bin and told him to go get corn anytime he wanted, and one night he had the idea that anyone should be able to get corn at any time.

“That got my wheels turning,” he said.

Chisholm teamed up with partners Dr. James Hall and Dan Barnes, who work with him at Merit Health River Region Medical Center.

“We found an engineer to do the electronics, and then got in with a guy to do the fabrication on the outside to make it bulletproof,” he said.

There was a lot of trial and error Chisholm said, adding the process took some time to get patents and trademarks.

The second Corn Xpress machine was put in at Super Junior on U.S. 61 North in March, Chisholm said, adding he expects it will do very well.

Chisholm said several people have contacted him about purchasing machines and the first one was sold for $40,000.

The price tag may seem high, but depending on location, the machine could pay for itself in as little as 18–24 months. Corn Xpress could be used to dispense grains, pellets and rock salt as well.