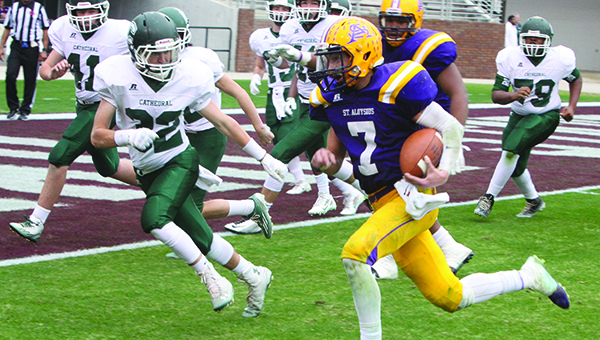 ON THE WAY OUT: St. Aloysius quarterback Connor Smith (7) runs for a touchdown in the fourth quarter of the Class 1A championship game against Cathedral. St. Al lost, 49-14 in 2014. St. Al is leaving the MHSAA for the MAIS.

By mid-afternoon Wednesday, hours after St. Aloysius and Greenville-St. Joseph announced they were moving from the Mississippi High School Activities Association to the Mississippi Association of Independent Schools, confusion on the issue reigned supreme.

Neither school had formally notified the MHSAA of its intentions, and thus were still technically members. An initial report indicating Natchez Cathedral was also jumping ship turned out to be premature, as officials for the school and Diocese of Jackson didn’t make the final decision until Wednesday evening.

Madison-St. Joseph, the last in the group of four Catholic schools weighing its options, decided to remain in the MHSAA.

It was a small glimpse of the chaos caused by a decision with statewide implications, and a preview of what’s to come in the next few days as both the MHSAA and MAIS deal with the fallout.

“There’s a lot of things that are going to come up that we don’t know are going to come up,” St. Al athletic director Mike Jones said. “They’re all workable situations. I’ve been reading the handbooks and trying to figure some of it out. It’s going to take a little bit, but we’ll get there.”

St. Al and Greenville-St. Joe made the jump to the MAIS in the wake of a recent ruling banning out-of-state students from participating in sanctioned activities. St. Al has 14 students who live in Louisiana, while Greenville-St. Joe has nearly 50 from Arkansas. Cathedral, which has 78 students from Louisiana, was widely expected to follow suit but has not yet made an official decision.

With nearly 140 students from the three schools affected, the Diocese of Jackson stood to lose several million dollars in tuition fees, which could have forced one or all of the schools to close.

That didn’t seem to be a major factor in the decision, however. Administrators, coaches and stakeholders at St. Al all insisted the decision to switch affiliations was about offering students as many opportunities as possible.

“I know nobody wanted any of the kids in Louisiana to be told they couldn’t be a cheerleader or on sports teams. Nobody would want their child to be told that,” said Scott Verhine, who has two sons enrolled at St. Al. “We just can’t tell kids that have been going to school here forever that they couldn’t be a part of it. To me, there was nothing else we could do. As far as the school goes, it’s a close-knit group. Everybody knows all the kids affected. That factor overrides every other factor.”

The decision by St. Al and Greenville-St. Joe to move is not unprecedented, but it is rare. The only school to leave the MHSAA in recent memory was Hartfield Academy in 2013. Hartfield left the MAIS to join the MHSAA in 2011, then was purchased by Pinelake Church in 2013 and moved back to the MAIS that same year.

Coincidentally, Hartfield and St. Al are expected to be in the same Class AAA district in the MAIS. Those schools will join Central Hinds, Manchester Academy and Riverfield (La.) in District 3-AAA.

MHSAA executive director Don Hinton said he wasn’t even sure if there was a formal procedure for member schools to follow for leaving the association. St. Al principal Dr. Buddy Strickland said he believed written notification was required and it would soon be sent. St. Al also faces a Friday deadline to pay its annual dues to the MHSAA, and failure to do so would likely be a de facto resignation of its membership.

“We’re going to sit down and write him a letter. I’ve been so busy I haven’t gotten to it yet, but I’ll probably do that (Wednesday) and mail it (Thursday),” Strickland said late Wednesday afternoon.

Hinton was in Tupelo for a district meeting Wednesday and said he didn’t want to comment on the situation until he had more information. Later Wednesday, the MHSAA issued a statement saying that Greenville-St. Joseph had submitted its resignation from the association.

“We wish the best for our schools, and if their needs are different than our rules then they have to make the decision that’s best for them,” Hinton said.

MAIS director of activities Les Triplett said that neither St. Al nor St. Joe had been formally accepted into his organization yet, but that it was likely to come soon. Without naming the schools, MAIS executive director Shane Blanton said in a statement released Wednesday that the applications were expedited to speed up the process with classes starting in early August.

“On July 28, 2015, MAIS Executive Committee met and considered an overture for membership from established schools in Mississippi. Because they are duly accredited by AdvancED, the MAIS Executive Committee instructed the office staff to expedite their membership applications so that students attending these schools will be able to participate fully in all MAIS activities during the 2015-16 school year,” Blanton said in the statement. “The MAIS office has tentatively planned a press release regarding this matter to be issued by close of business Friday.”

The coming days will be a whirlwind of activity for coaches, athletes and administrators at St. Al and Greenville-St. Joe.

There is a meeting scheduled for Friday at MAIS headquarters in Pearl to hash out a number of logistical issues such as scheduling, district alignment, new rules and procedures for both schools to follow.

After that, several teams will need to shift gears and some will go into emergency preparation mode for the season.

While football, swimming and cross country were already getting ready and just need to learn about new opponents, girls soccer and fast-pitch softball play in the winter and spring, respectively, in the MHSAA and in the fall in the MAIS.

The first playing date for softball and soccer is Friday, meaning both teams are likely to lose at least a few playing dates while they sort through various issues.

“From the standpoint of both of them, most of their athletes have been active during the summer,” Jones said. “Soccer-wise, we have to figure out where we’re going to practice and play. We usually play on the football field, so we’re going to have to make arrangements for that. This whole thing is all a workable situation.”

St. Al softball coach Candice Reeder said that while it’ll be tough to prepare for a season in a few days, it was a challenge worth undertaking.

Two of her players, Jordan McDonald and Michelle Howington, live in Louisiana and would have been ineligible if the school had remained in the MHSAA.

Two others, Brooklyn and Brantlee Richards, live in Edwards and might have been ineligible under another MHSAA rule prohibiting students who live outside a 20-mile radius from campus from participating in athletics.

Now, all of them will get to play.

“Am I sad we’re not going to get a chance to play Bogue Chitto again, or Stringer in the playoffs? Of course. But this is what’s ultimately best for the school. If you want what’s best, this had to happen,” said Reeder, who is also a graduate of St. Al. “It’s a new day. I’m happy they are not going to be left out to dry.”