Duo forced to split up after heat injury 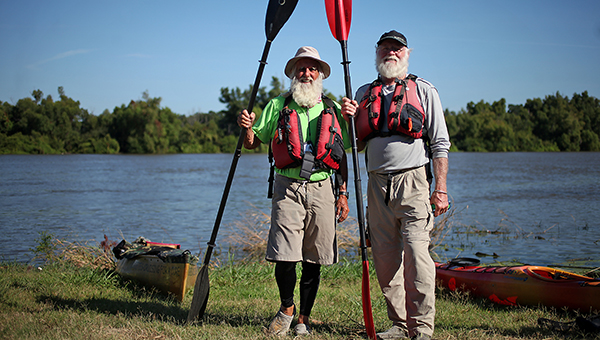 PRESSING ON: Dale Sanders, 80, prepares his canoe to head out on the next leg of his journey Friday morning at Vicksburg CityFront.

Dale Sanders, 80, and Richard Sojourner, 70, were set to break a world record but one had to turn back.

Sojourner and Sanders were paddling the length of the Mississippi River from source to sea, to set a record as the oldest men to paddle solo and raise awareness for Type 1 diabetes.

“My primary goal is to raise awareness, donations is secondary because if we can raise the awareness to get society on board, they can find a cure,” Sanders said. “It’s more important to get the population on board with the awareness side of it than the funding side.” 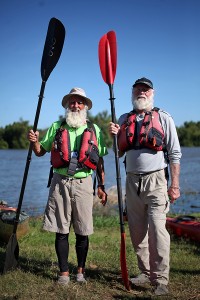 Sojourner is a fit man, but keeping up with Sanders, a 12-year prostate cancer survivor, is hard for people even half his age.

The men arrived in Vicksburg Wednesday afternoon and were taken care of by local River Angel Tim McCarley. While in Vicksburg, Sojourner had some blood work done because he was feeling dehydrated.

Friday morning the men were at CityFront planning to continue their journey when doctors called to say they didn’t recommend he continue paddling and to wait at least five more days for another blood test.

“I’m not 100 percent, but I’m a whole lot better than when I got here,” Sojourner said.

The plan was for Sojourner to get to the gulf first so he could hold the record for a few minutes before Sanders came through to take it from him.

World record rules state that paddlers can finish the journey within a calendar year to obtain the record. Sojourner will not get to hold the world record for those few minutes now, but if things go according to plan, he will take the second place finish before the year is over.

As the men were receiving the bad news they met Erica Gray.

Gray, 32 of Vicksburg, was diagnosed with diabetes in March. She is still having trouble coming to terms with her diagnosis, but her daughters are keeping her strong.

“I never even knew the signs, I never knew what to look for,” Gray said. “Because I’m healthy, I’m skinny, so I’m thinking I’m doing everything possibly right.”

Record high water levels on the Mississippi have made travel difficult.

The high water has been bittersweet for the paddlers. It has made travel faster, but also harder to find dry land for camp.

“In two days we paddled from Greenville to Vicksburg, that’s almost exactly 100 river miles,” Sanders said. “So that’s 50 miles a day. That’s unheard of in a canoe. You might be able to do it in a fast kayak, but in a loaded canoe you just don’t do that.”

Sojourner was devastated to have to quit the journey after coming so far. Quitting has never been an option for Sojourner and he was reluctant to step away, but he pushed Sanders to go on without him.

The guys were already making plans on how Sojourner could get back in on the journey in the coming days. Whether he starts again in Vicksburg in five days time, joins Sanders later next week in Louisiana or comes back to the river in October are yet to be finalized.

For more information or to follow Sander’s journey log on to greybeardadventurer.com. The website features a donations link, blogs, pictures and videos. Donations go to the Juvenile Diabetes Research Foundation.