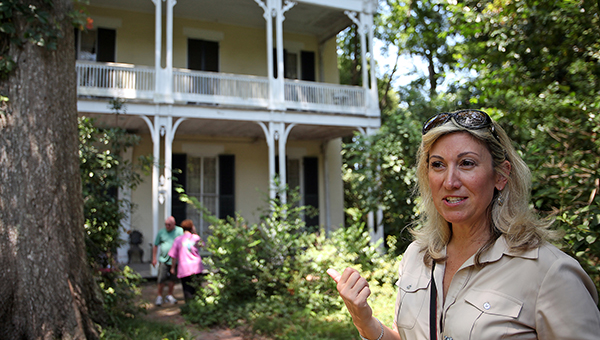 Kendra Reed discusses the history of the McRaven House in front of the home.

Vicksburg has had multiple historic homes sell in the recent weeks.

Dr. Steven Reed and his wife Kendra closed on the McRaven House Monday.

The Reeds, of Magee, enjoy visiting old homes in their free time. On a chance Internet search Steven saw the McRaven was for sale, and they decided to look into buying the house.

They will make minor repairs to some of the windows and the peeling plaster.

She has already begun interviewing people for manager and tour guide positions for historical tours during the day and ghost tours at night. The plan is to have tours running again by October.

“Our primary passion is to, one, save this house, especially with all these antiques. It’s such an interesting house, too, and also to share it because I believe in edu-tainment, educate you but entertain you at the same time,” Kendra said.

The home is located at the end of Harrison Street, formerly McRaven Street, where the gate is almost obstructed from view by surrounding greenery. Horticulturists from the Mississippi State Extension center will help the Reeds identify and label all of the plants and trees growing in the yard.

A railroad runs nearly through the front yard and trenches can still be found on the property where Civil War soldiers hid while they attacked the opposition’s railcars.

McRaven has been closed since 2008 when previous owner Leyland French moved out to take care of his parents, and he had been trying to sell the house since. In the meantime, Steven and Stephanie Hansen have served as caretakers to McRaven. They have put a lot of time and effort into keeping the grass cut, the cobwebs swept and the dust at bay.

The house has only suffered minor vandalism. The Hansen’s believe this is because of the house’s haunted origins. It is said to be the most haunted house in Mississippi and the third most haunted in America.

Kendra has talked to ghost hunters who say there are 14 ghosts on the property.

“Not counting the Civil War Confederate soldiers in the yard and the Native Americans because this was also a path through the Trail of Tears,” Kendra said.

Countless soldiers are buried on the property, and a few years ago a marker was placed to recognize the unnamed servicemen.

The stories are Kendra’s favorite feature of the house. She is already well-versed in the house’s history.

McRaven was built in three sections, and each section of the house is still furnished true to the time period in which it was built. The first in 1797, before Mississippi was a state, is the frontier or pioneer style portion of the house with an upstairs bedroom and a kitchen underneath. Andrew Glass, who was known to rob travelers, was the first owner.

Next, Vicksburg namesake, Newitt Vick, owned McRaven for a short time. Then sheriff Stephen Howard bought the house in 1836, and the second section was built in an empire style with a second bedroom above a dining room. Mary Elizabeth, his 15-year-old wife, died during childbirth in the new bedroom.

In 1849 it was sold to John Bobb who built the final section of McRaven. This section has another bedroom set above a parlor room and entryway with a grand front porch in a Greek revival style. The porch has since taken on a more Italianate style since its beating during the siege.

McRaven was used as a field hospital during the Civil War. Bobb argued with, and eventually threw a rock at, Union soldiers who were picking flowers out of his yard. Shortly after, Bobb went to the courthouse to inform Gen. Henry W. Slocum of his actions. The apology was accepted, but as Bobb walked home, he was met down the street by a number of Union soldiers who killed him.

Years later William Murray purchased the house and raised his family there until his death in the house in 1911. His wife and two of their children all died in the house.

Two of Murray’s daughters continued to stay in the home until 1960 when one died and the other moved into a nursing home. The sisters rarely left the home and in their older years began using some of the furniture as firewood and stayed in the dining room exclusively.

Even into the 1960s, the sisters did not install electricity, indoor plumbing or running water. They used the original kitchen, which is only accessible through an outdoor entry, and the original bathroom, which is detached from the house in the backyard. William and his two daughters who lived there for so many years are also said to roam the halls on occasion.

Brad and Pat Bradway were the first family to make the house a tour home after extensive renovations from where it had fallen into disrepair. The Bradways didn’t live in McRaven and in 1985 French purchased the home. He lived there but also kept it open to tours.

A new logo for the house is in the works of a Raven with a key in its mouth to incorporate the city’s usage of a key symbol.

“We want to embrace what Vicksburg’s got going,” Kendra said.

The Reeds plan to update the old website at www.mcraventourhome.com