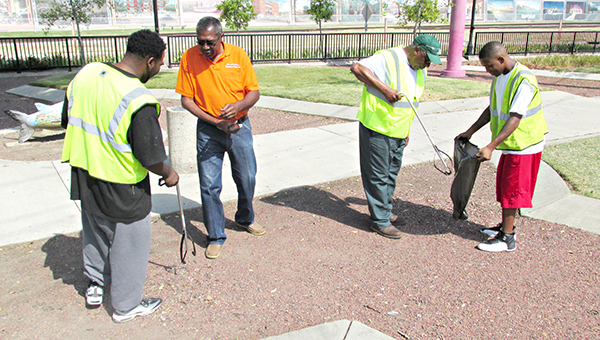 Mayor George Flaggs Jr. put on a pair of rubber gloves, picked up the toilet brush and prepared to enter the men’s restroom at Catfish Row.

“Don’t let my wife find out about this,” he said as he walked in the stall and bent over to clean the toilet.

It was Thursday morning and Flaggs was out of his office and his three-piece suit and into green pants, a grey shirt and a yellow reflective vest — the uniform of a city community service worker.

The city’s community service crews are composed of residents who are unable to payoff fines for misdemeanor offenses and work the amounts off by performing duties such as collecting trash and litter, cleaning the city’s parks and collecting bins of recyclables for the city’s recycling program.

The mayor’s tour of duty with the crew was part of his program of working in city departments to talk with employees and learn more about their jobs. He previously worked with a sewer department crew and at the water and gas administration office where residents pay gas, water and sewer bills.

He also plans to work in the community development department to observe city building inspectors, and work in court services.

Community Service director Robert Hubbard said he learned last week Flaggs was going to join one of the crews Thursday.

“We’ve been out to the cemetery to make sure everything was OK, and picked up a mattress on the side of South Frontage Road,” Hubbard said. “We get those calls (about mattresses) throughout the day. He (Flaggs) hates seeing them on the side of the road, even in front of a house.” 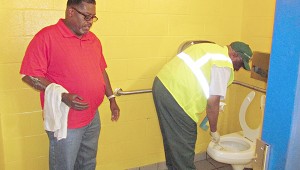 Community service supervisor James Johnson, left, gives Mayor George Flaggs Jr. direction as the mayor cleans a toilet in one of the restrooms at Catfish Row.

Flaggs went on a tour of the department’s recycling route and was supposed to see a street off U.S. 61 South where the crew has to collect household garbage because the street is too narrow for the garbage trucks.

During his stop at Catfish Row, Flaggs received instruction in properly using tongs to collect trash, and talked with two workers, asking one how he liked the work.

“I’d like it a lot better if I got paid,” the worker said.

“Why don’t apply to come to work for the city?” the mayor responded. “Go fill out an application.”

Crew supervisor James Johnson said he liked having the mayor working with them “giving him an insight as to what we do as community service supervisors — making sure the community enjoys the cleanliness and attractions of the riverfront and Catfish Row Park.”

“We’re glad to have him just to see the activity,” Johnson said. “We’re one of the few departments that get a lot of feedback from the people as far as upkeep, and we maintain and make sure everything is in good shape for our tourists.”

“If you don’t think this is important, don’t do it for two days,” he said. “My phone will ring off the hook. That’s the value of the services.

“I learned a lot this morning,” he said.

He elected to clean the restrooms at Catfish Row, he said, because he wanted to show the workers that no job is insignificant when someone takes pride in their work.

And while he is still concerned about the cost, Flaggs called the program “a very necessary program.”

“They work hard and they do a good job,” he said. “They do a very good job keeping the city clean. The program is worth the money to keep.”

The Vicksburg Senior Center took its first daytrip this week on the city’s brand new motor coach on what the... read more