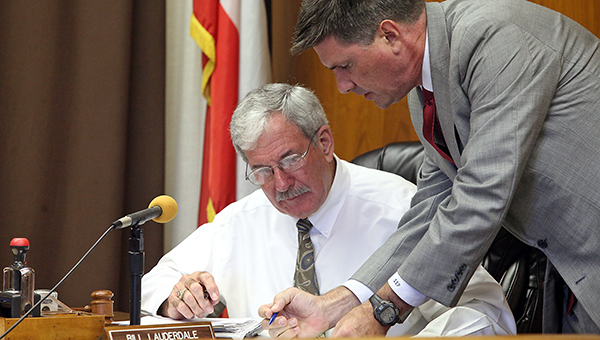 Pickering presented the check for $279,122.82 Monday during the regular meeting of the Board of Supervisors.

“This is a good thing getting to return these funds that were embezzled. It’s something our office worked very aggressively to do against the bonding companies and the individuals. We’re glad that we’ve got that check to give you today,” Pickering told supervisors.

Each of the five supervisors personally thanked Pickering and his office for recovering the money.

“We appreciate you being able to follow up on this and seeing that the citizens of Warren County receive what’s owed to them,” District 1 Supervisor John Arnold said.

Palmertree is presently serving a five-year prison sentence in the Central Mississippi Satellite Facility for women in Flowood for embezzling $12,000 from her office’s civil and criminal accounts in 2012.

She pleaded guilty March 30 to stealing an additional $103,736.75 meant for restitution of crime victims from an account under her care between Jan. 1, 2013, until supervisors removed her from office May 15, 2014, after OSA investigators turned up evidence she had declared residence in Madison in 2013. She was sentenced to an additional five years on the second theft to be served with the first sentence.

In March 2013, she filed suit against Pickering and Warren County over claims she owed the county $671,751.75 in excessive salary above the state-mandated cap for circuit and chancery clerks and questionable subcontractor payments to her father and predecessor in office, Larry Ashley, from 2006 to 2011.

The county and Pickering countersued, and later amended the total to $818,251.75.

In March 2015, Palmertree dismissed her suit against the county and Pickering, and Chancellor Dewayne Thomas entered the $818,251.75 judgment against her.

Western Surety challenged the county’s claim it was on the hook for $300,000 of the judgment, but Thomas ruled in the county’s favor.

Once Western Surety dropped Palmertree, Raleigh, N.C.-based Surety One picked up the clerk’s bond for $100,000.

“She continued her same habits during that time,” Pickering said.  They’re going to get the privilege to honor their commitment to the citizens of Warren County.”

After the $100,000 is recovered, Palmertree will still owe several hundred thousand dollars to the county, Pickering said.

“She will still owe a little over $400,000 to Warren County and we will work with you to make sure that money is repaid as she draws her retirement and any other forms of income when she gets out of the department of corrections where she is currently residing,” he said.

“There’s a problem getting retirements. We can’t get it directly from PERS (the Public Employees Retirement System,” Board President Bill Lauderdale said.

Pickering said “every option is on the table” in recovering the money, and he and his office would continue to support legislation to reform the retirement system for public officials convicted of corruption.
“The taxpayers should be made whole before these individuals get to benefit from their time as a public employee and betraying that trust,” Pickering said.