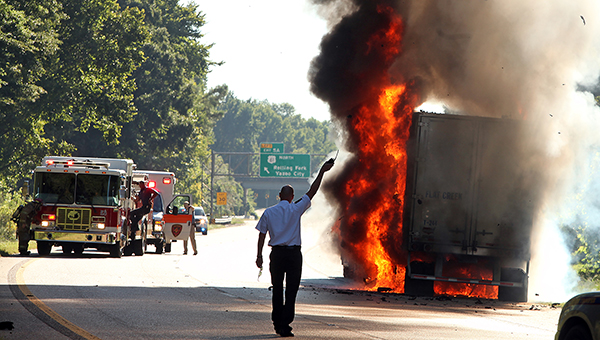 First responders prepare to fight a fire engulfing an 18-wheeler Thursday morning in the eastbound lanes of Interstate 20. Heather Whittle, of DeFuniak Springs, Fla, was driving a Flat Creek Transportation 18-wheeler east on I20 when her brakes overheated, starting a fire on the tires and trailer. Brandon Bytell, a passenger in the vehicle, was transported to River Region Medical Center before being airlifted to University Medical Center to be treated for his injuries after a burning tire exploded while he was trying to extinguish the fire. (Justin Sellers/The Vicksburg Post)

The brakes on a tractor-trailer overheated Thursday just before 9 a.m., causing a tire on the stopped trailer to explode in flames.

The explosion injured one of the drivers of the truck and caught the entire truck on fire near U.S. 61 North on I-20 eastbound.

Cpl. Jeff Harrell, with the Warren County Sheriff’s Department, noticed the tractor-trailer’s rear trailer wheel on the driver’s side was smoking as it drove down the interstate. He pulled the vehicle over to let its driver, Heather Whittle, 41, know about the problem.

Once she pulled over and was made aware of the issue, Whittle’s co-driver, Brandon Bytell, crawled under the rear of the trailer to suppress the fire on the interior side of the wheel with a fire extinguisher when the tire exploded and knocked Bytell unconscious.

“The driver didn’t sustain any injuries at all. The passenger was out trying to put it out with a fire extinguisher and apparently was very close to the tire when it exploded, knocking him to the ground,” Vicksburg Police Chief Walter Armstrong said.

Harrell then worked with Whittle to pull the man from under the truck as the fire continued to grow, engulfing the tractor-trailer.

“It’s fortunate that Deputy Harrell noticed the wheel on fire … That could have been tragic that he was under there and the explosion injured him and rendered him unconscious. Thankfully, Deputy Harrell and the driver of the truck were able to get to this man to save him,” said Martin Pace, Warren County Sheriff.

Bytell was taken to University Medical Center. His condition was unavailable at press time today.

“He had to be sent to the local hospital and airlifted into Jackson,” Armstrong said.

The truck driver and the co-driver are from DeFuniak Springs, Fla. Flat Creek Transportation of Kinston, Ala., owns the tractor-trailer they were driving.

The fire was investigated by the Vicksburg Police Department because it took place within the city limits. No citations were issued.

“I don’t know if they were applying the brakes too often, but I think the brakes got too hot, set the tires on fire, which caused the trailer to catch fire,” Armstrong said.

The eastbound lane of I-20 was down to one lane the remainder of the day in order to remove the burned tractor-trailer from the shoulder. The road reopened later Thursday.

Focus on special teams pays off for Central Hinds

During spring practice, Central Hinds coach Lance Teasley made a commitment to improve the Cougars’ special teams. It only took... read more