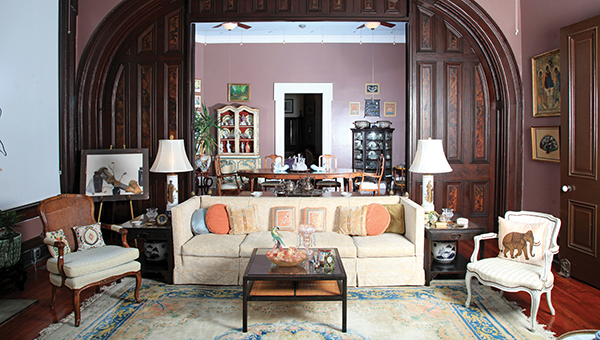 As I approach the entrance of an immense brick home on the corner of Monroe and Grove streets, a gentle man welcomes me.

“Oh, hello, come on in. Don’t look at my hair,” he said, as he pulls off his toboggan. It’s a cold, soggy day in Vicksburg. “I’ve been painting one of the rental properties.”

Stepping out of the damp elements and into the Joseph Bazsinsky House, I am greeted by a beautiful stairwell and dark hardwood floors. The historic home draws me in, and immediately my eyes begin to roam.

Andrew Dawson is softly speaking, but I find that I can’t focus on his words because the antiques, eclectic artwork and decorative details that have been placed about captivate my attention. So much character, and I’m only in the foyer.

Dawson leads me through an Italianate doorway. My mind begins to generate questions about the spectacular space and the original Italian marble mantel. I have so many things to learn, so many details to cover.

“We have to wait for David to come down. He’ll tell you all the stories,” Dawson said. “I started polishing the folding doors earlier. I haven’t finished this side yet.”

The folding doors — I stand in awe. From floor to ceiling, from one wall to another, an overwhelming arch of beautifully crafted and stained wood, accessorized by fine pieces of metal work that bracket each panel together. Amazing.

Slowly, I take in the wall-sized doors that serve not only as one of the most outstanding characteristics of the Bazsinsky home but also as a grand partition between an intimate parlor space and a fine dining area, complemented with antique pieces. He tells me some of theses were rescued from a New Orleans home that had met with the fate of Katrina. It seems that every piece and artifact has a truly unique story.

“Here he comes,” Dawson said. I hear a charismatic “Hello.” The storyteller and historian of the home enters the parlor. I turn from the doors and am met with the grand energy of David Mitchell.

“There hasn’t been anyone who has come in here who wasn’t struck with wonder by those doors,” David said. My fascination must have been apparent to him. “They’re original and unique. The general reaction is that no one has ever seen anything like them. What is most fascinating about them is not only the design, scale and operation of them, but the idea that the entire surface is faux paint. What appears to be stained wood grain is actually hand-painted onto the surface to look like natural wood.”

I thought he was kidding. I couldn’t help but walk over and put my nose to the structure. David laughs. “The experts say that it was a common decorative technique of the period,” he said. I’m no expert, but yes, the doors are hand-painted and the only way to tell is to almost kiss one of the panels. Fascinating is an understatement.

If only these doors could talk. I can imagine the tales and memories that the more than a century old partition has witnessed as it served to divide the lady’s parlor from the second parlor, believed to have been the family library, but now serves as a dining room. David and Andrew now use the third parlor, reported to have been the gentleman’s parlor, as a cozy den.

The home, built somewhere between 1859 and 1861, is the only remaining structure in Vicksburg that has a triple parlor. The concept of a Southern parlor dates back to antebellum homes of the 1800s when parlors were more a formal dining room often used for hosting guests and private conversations.

I take a seat on the creamy white sofa of the lady’s parlor and we continue with our own private conversation. As I try to focus on David’s voice, my imagination swirls. If only I could have eavesdropped. With no television or facebook, gossiping over needlework must have been the prime entertainment.

At this point, David explains various techniques employed by prosperous homeowners designed to display their wealth. Front parlors, for instance, were typically elaborately decorated with the owner’s more expensive possessions. Another interesting detail, for example, is the differing size of glass panes in the windows.

“It has been determined that the smaller windows with smaller panes must have been in the servants’ prep area. The public would not have seen that area so there was no reason to spend more money there. Furthermore those windows are plain, lacking the Italianate molding.”

As one moves from room to room toward the back of the house, the windows grow smaller as well as the panes within them. “Larger panes of glass are exponentially more expensive, of course,” David explained.

The same notion of showcasing their wealth holds true for the bricks of the exterior.

“If you notice on the side of the home that faces Monroe and Grove streets, there are very fine red Italian bricks. The joints between those bricks are very thin and the mortar is white. But as soon as you turn the corner of the house, the bricks that face the gardens and not the street are completely different. Those are a very coarsely, slave-made brick that have very wide mortar joints. The mortar is sandy and gritty and porous. It’s obvious they spent their money where people would see,” David said.

In the early 1900s, apparently for no other reason but to keep up with the times, the rectangular porch was removed and the original roofline was pulled back and reworked. The front of the house was given an unusual look with a large elliptical Queen Ann style Victorian porch. The family appeared to be overly concerned with the current trends.

At this point I find myself intensely curious about the inhabitants. David proceeds to enlighten me about the Bazsinsky family. In the 1840s, one Joseph Bazsinsky, a Jewish Prussian immigrant, had acquired wealth through his business of transporting iced seafood from Biloxi to Memphis. Vicksburg was the halfway mark for his wagon train.

Just south of downtown, at present-day Bazinsky Road near Home Depot, he also had a plantation of crops and livestock. Notice the spelling of Bazinsky Road anglicizes the Prussian name by dropping the first ‘s.’

In the 1850s, he met a young woman of German descent, Adeline Levy. They began their married life in Biloxi and started a family that grew to include 14 children. In 1859, he moved his family to Vicksburg, retired from the wagon train, and maintained his successful livery stable and dry goods store downtown. The livery store building still stands at the corner of China and Walnut Streets.

“The couple purchased the empty lot at the corner of Monroe and Grove and built their home between 1859 and 1861. It is in the exact footprint as you see it today, which is proven by Sanborn maps of the area,” David said.

According to a 53-page letter that documents the family history, the Bazsinskys fled to a plantation in Raymond in 1863 during the time of the Siege and returned to their home and successful businesses during Reconstruction.

When Joseph passed away in 1888, everything was left to Adeline. Out of all 14 children, the estate was willed to a single child after Adeline’s death in the 1900s.

“It’s amazing to me that she would leave all to a daughter and not to a son,” David said. “The daughter, Amelia, never married, never had children, and never moved from the home.”

She was a buyer for several of the Jewish department stores on Washington Street.

“The story is that on one of her trips to New York, she fell down the stairs of her hotel and broke both of her ankles. They never healed well. She became a cripple, an invalid.”

The front parlor in which we are having our private conversation was then turned into Amelia’s bedroom. Upon her return from New York, she became the matriarch of the family, and grew to weigh well over 300 pounds.

Amelia passed the home to a nephew, Nathan Lewis, under the condition that the property be used as a hospital, once he became a doctor. Nathan evicted all other family members. He and his wife, Olga “Doug” Lewis, were not able to make the home a hospital and instead turned the entire downstairs into a medical clinic.

The beautiful stairwell in the entry hall was walled up and the upstairs became the Lewis’ living quarters. Amelia’s bedroom then became the reception parlor for the clinic.

When the home was converted, the interior lost its magnitude with the addition of walls that created examination rooms. Dr. Nathan Lewis left the property to Olga in 1976, and she passed away in 2003.

The solid brick home remained in the Bazsinsky family for 160 years before eventually making it into the hands of David Mitchell and Andrew Dawson. In 2006, they moved from Dallas to the charming cannon clad Vicksburg. Dallas was no match for The Key to the South. It had grown too big and the charm of Vicksburg enticed David and Andrew with its small town coziness and historic architecture.

A few months after the purchase, the home began to bloom as renovations began on the historic gem.

Today, not only is the Bazsinsky House home to David and Andrew, but it is also opened for public tours in addition to being a bed and breakfast. It was also featured on Vicksburg Tapestry Tour of Homes and is available to rent for private events. It is a popular venue for engagement parties and wedding receptions as well as a romantic getaway for locals. The lovely home is conveniently located near the Old Courthouse Museum and touts an easy access caterer’s kitchen on the bottom floor. Reservations can be made at www.bazsinskyhouse.com.

Emily Clark is a former staff member of The Vicksburg Post and wrote this peice before heading to the next stop on her career.

Harrower enjoys passing on knitting just as her mother…