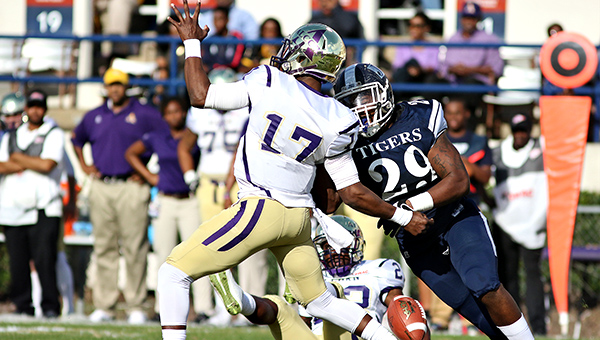 It had been two years since Alcorn State had this kind of day on offense.

The Braves posted their lowest point total in a Southwestern Athletic Conference game since November 2013. Since they still managed to beat Jackson State 14-10, however, they shrugged it off as one of those things and quickly moved on to the next challenge.

“Sometimes it happens. That’s football,” Alcorn coach Jay Hopson said. “We didn’t have one of our better days offensively, but that’s why you play the game. The defenses stood up, and it was good to see. They had their back there.”

Having wrapped up the SWAC East Division championship the week before probably made it easier for Hopson and the Braves (8-3, 7-2 SWAC) to stomach this one. They’ll still get to play in the conference championship game Saturday in Houston against Grambling (9-2, 9-0).

That doesn’t mean they can easily ignore a few troubling trends, however.

Quarterback Lenorris Footman, who has played the last four games in place of injured starter John Gibbs, Jr., has completed just 9 of 36 passes in wins over Alabama A&M and Jackson State the past two weeks. He was 7-of-24 for 89 yards Saturday against JSU, with no touchdowns, one interception and one lost fumble.

Footman has compensated in the running game — he has 860 yards and a team-high 10 touchdowns — but still is completing just 40.9 percent of his passes for the season. He said he’s not worried about his passing, so long as the Braves can move the ball on the ground like they’ve been doing.

Alcorn is averaging 299.7 rushing yards per game, which ranks fourth in the Football Championship Subdivision. It has had a 100-yard rusher in each of its last nine games.

“It’s not really a concern. I just try to go out and do my thing each and every Saturday. If it’s rushing or passing, you’ve just got to take whatever’s there,” Footman said.

Facing Grambling for the second time this season will be an interesting test for the Braves. Grambling leads the SWAC in rushing defense, but is last in pass defense.

Footman said the Braves aren’t far from another big game — hopefully at the perfect time against a team that has beaten them twice in a row.

“It’s just the little things. We’ve got to keep working on perfecting our craft. Do what we do, and make it perfect, and hopefully it’ll turn our way in Houston,” Footman said.

Indeed, the promise of a trip to the conference championship game and the celebration after beating Jackson State overshadowed any other concerns. Most of the Braves seemed able to rationalize the reason for the offense’s struggles, and thus push them to the side as they soaked in the moment and switched gears to Grambling.

“I think we were more into playing Jackson State in a rival game than playing our own game,” said Alcorn wide receiver Marquis Warford, who returned a kickoff for a touchdown and caught five passes for 61 yards against JSU. “We really weren’t focused on executing, we were more worried about the little things in between the whistle. Once we finally got that going, our offense can’t be stopped.”