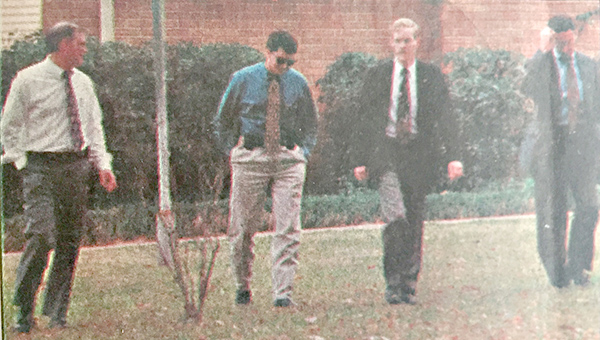 The morning of Monday, Nov. 20, 1995, is one Nancy Whitten wishes she could forget, but never will.

This year was the 20th anniversary of one of Vicksburg’s and the nation’s most intriguing unsolved mysteries: What happened to 62-year-old millionaire and socialite Mary Jacqueline “Jackie” Levitz?

While getting ready to go to work at her job at the levee board in Tallulah, La., Whitten received a call at her Vicksburg home from long-time friend, Tiki Shivers, who lives in Tallulah.

Shivers’ sister, Jackie Levitz, was living in and in the process of having renovated a home on the river in Vicksburg. Shivers had been unable to reach her, she told Whitten.

Levitz, who was originally from Oak Grove, La., was in the process of relocating to Vicksburg from Palm Beach, Fla.

“Tiki asked if I would mind running by there on my way to work. She said she had tried to get in touch with her sister over the weekend, but hadn’t been able to. She said she was redoing that house. Tiki worried that she may have gotten on a ladder and fallen or had some kind of accident and needed help,” Whitten said. “I told her, of course, I would go by there.”

Whitten said she pulled into the driveway of Levitz’s home overlooking the Mississippi River off Warrenton Road and saw a car, which she assumed to be Levitz’s.

“You actually pull into the driveway from the back of the house. The front of the house actually faces the river,” she said. “I knocked on all of the doors. I called out to her, ‘Jackie, it’s Nancy! Are you in there?’

“I had a friend who lived just a couple of houses down the street. I didn’t have a cell phone at the time, so I went to her house to use the phone and call Tiki and told her about the car being in the driveway, but that no one answered the door. She asked me, ‘Did you try the doors?’ and I told her I did not. Then she asked if I would mind going back and trying the doors and maybe look in the windows, so I did.”

Whitten drove back to Levitz’s home and went to the kitchen area door. It was locked, she said.

Then, she tried the home’s front door.

“I’m not sure it was even closed good. When I touched the knob, the door flew open. That’s when I could hear a TV playing,” Whitten said.

She followed the sound of the television and made her way to Levitz’s bedroom.

“I stepped into the bedroom and it was real strange because the bed was completely stripped,” she said. “The bed comforter was rolled up and laying on the floor against the way. That didn’t seem that unusual to me because, to be honest, sometimes I’ll do that. Lots of times you don’t want to sleep under a thick, heavy comforter, so you roll it up and put it off the bed completely.”

She said to the right of the room was a bay picture window. On its ledge was a “little tiny TV,” a half-finished glass of water and a pair of diamond earrings.

“But at the foot of the bed was a huge spot that appeared to me to be blood. It had already turned dark,” Whitten said. “It was probably the size of a number two washtub.

“With that being on the floor, I walked around it and into the bathroom area. I could immediately see that on the closet to the right, the frame was busted, like it had been kicked in,” she said.

At that point, Whitten made her way to the kitchen area of the home and used the telephone in the kitchen to call James Earl Shivers, Tiki’s husband.

“Rather call and tell Tiki what I saw, I thought I ought to call James. I called him and told him, ‘Things don’t look good here.’”

She said Shivers called a friend of his, B.B. Harmon, who at the time was sheriff in Madison Parish, La., and told him what was going on and asked Harmon to call his friend, Paul Barrett, who was Warren County sheriff at the time.

“From that point, it took on a life of its on,” Whitten said.

James Earl Shivers arrived at the Levitz home, as did Barrett in short order with “a hoard of deputies,” she said, as well as numerous officers from the Vicksburg Police Department.

“When Paul and them got there, he looked around the bedroom and he immediately began to notice things I didn’t. He leaned down and picked up broken fingernails off the floor and said, ‘She put up a fight.’”

At that point, Barrett asked everyone to exit the home and called in forensic investigators from the Mississippi Crime Lab, Whitten said.

“They came from Jackson, but they got there quickly — about and hour or an hour and a half. We ended up there all day. They asked us to stay,” she said.

The FBI was also asked to join the investigation and they arrived on the scene that same day.

“Nothing. Nothing was ever found of her. It really bothered me for a long time.”

She said she had noticed indentions from what looked like a vehicle’s tires near the front door when she first arrived.

“That didn’t mean anything to me because they were working on the house. I thought a truck had just pulled up to the front door. But later on, they found out none of the workers had come that way. It was such a strange situation.”

Whitten said Barrett talked to Tiki Shivers sometime later in the morning and told her, “This doesn’t look good. He said he turned that mattress over and the entire bottom part was a bloodstain. He told her in his opinion, it was way too much blood for anyone to survive.”

However, that’s not what a medical expert would later say about the blood found at the scene, said Warren County Sheriff Martin Pace, who was one of the deputies who responded to the scene initially.

Pace said an expert concluded that the amount of blood found at the Levitz home did not in itself mean Jackie Levitz was dead.

“Technically, she’s still a missing person. In a civil court, she has been declared dead, but from a criminal standpoint, she’s still missing because her body has never been located,” he said.

In a civil case, Levitz was declared dead in Florida in 2001.

Levitz’s disappearance became the top of national television shows like Dateline. She was the widow of third husband Ralph Levitz, who owned a national chain of furniture stores, and inherited millions when he died.

Pace said law enforcement is no closer to finding the answer to the question of what happened to Jackie Levitz than they were in 1995.

“We’ve had hundreds and hundreds of tips and followed up on every one, but none ever went anywhere,” he said. “Investigators close to the case have developed several theories, none of which have been proven.

“Search dog teams, cadaver dog teams, aerial searches — law enforcement from a number of agencies went to great lengths in the early days and weeks of that investigation to no avail. They followed literally hundreds of tips, not only in this area but across the country,” Pace said. “The FBI has been a tremendous partner in this investigation and have dedicated agents and hundreds of man hours to aid in this investigation. There has been tremendous cooperation between law enforcement agencies on this case from the start. It’s just one of those cases that are terribly frustrating, but it’s not because of lack of effort.”

Whitten said she still thinks and dreams about entering Levitz’s home that November morning in 1995, particularly as Thanksgiving nears each year.

“I talked to Paul Barrett about it several times and I was always of the opinion if Paul Barrett had lived, I believe he would have eventually found out what happened. He had so many connections no one else had.

“I would dream about it. In fact, I got Tiki and them to let me go over there one night and spend the night in the house. I just wanted to go over there and pray,” Whitten said. “Of all things, it came up a bad storm.”