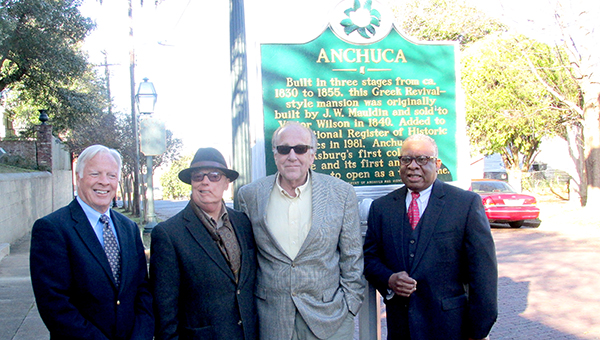 One of the Vicksburg’s oldest homes celebrated its 60th anniversary as a tour home Thursday with the unveiling of a state historic marker and free tours for travelers and residents.

In brief comments following the unveiling, Pharr also paid tribute to the First East Street neighborhood that surrounded the mansion.

“You can look at Anchuca and across (the street) at the modest cottage. The diversity and uniqueness of the place represents who we are as Americans, in my opinion, and it is the American dream. All those immigrants who came here and built this community in the 1820s and 30s, and we’re still building it today. It’s a neighborhood that means a lot for this nation and who we are as a nation.”

Vicksburg Mayor George Flaggs Jr., who attended the ceremony for the city, calls Anchuca “One of our greatest assets to the industry of the city, tourism.”

“We congratulate Anchuca on 60 wonderful years and look forward to them hosting guests from around the country and around the world another 60 years,” Vicksburg Convention and Visitors Bureau executive director Bill Seratt said.

The impact of homes like Anchuca, he said, are “a very important part of our tourism economy in that so many people want the experience of historic interpretation, and Anchuca provides an excellent opportunity for that.”

Built in Greek revival style in 1830 by local politician J.W. Maudlin, Anchuca was the first columned mansion in Vicksburg and the first historic home in the state to be turned into a bed and breakfast inn.

The mansion, which is listed on the National Register of Historic Places, was opened as a tour home in 1955, and later became the first historic home in Vicksburg to become a bed and breakfast.