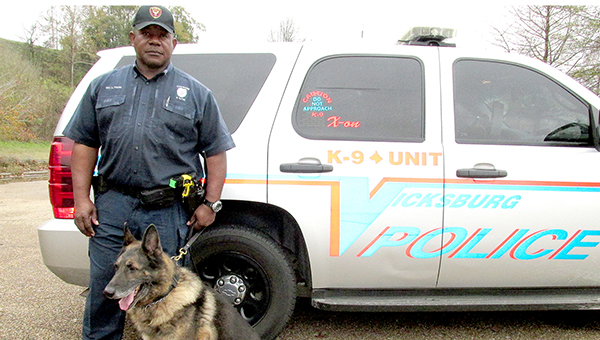 Two individuals specially suited to the job they’re tasked to do and experts in their field.

X-on is a German Shepherd who has been with the department since 2006, trained to sniff out and locate explosive devices. He is also trained to search for dead bodies and to track and apprehend (capture) suspects who try to run and hide from officers.

“The department has two K-9 officers, me, and Donnie Higgins, who has Thor, X-on’s son, which is a drug K-9,” Young said.

X-on, he said, came from Russia, where he was trained in explosive and cadaver search, and bought by a company in the U.S., which trained him for tracking and apprehension.

Young came to the Vicksburg Police Department in 1998 from Louisiana, and started in the patrol division. After several deployments overseas with military duty in the Navy, he transferred to the traffic division and then to K-9. He is also to the department’s traffic division supervisor.

By the time a handler meets his dog, he said, the animal is already trained for a certain field.

“We come in for 6 to 8 weeks to train,” he said. “When you go to K-9 training, it’s not the dog learning you, it’s you learning the dog. You’re actually watching and they’re training you how to watch and learn.”

The first week of training, he said, determines if the handler and the dog are able to bond. Dogs, he said, are just like people — sometimes they just can’t get along with someone. And if the dog doesn’t bond with the handler, the handler is replaced, not the dog. They replace the handler.

“Just because you go to K-9 school, doesn’t mean you’re going to be a K-9 handler,” Young said. “If the dog doesn’t bond with you, they have to send somebody else. If you don’t bond in the first week, and the instructor can tell, they’ll know within the first week, because the dog won’t listen when its given a command. We learn the commands in the first week.”

All commands are given in a language other than the handler’s native tongue. In X-on’s case, he was trained to understand Dutch. The reason, Young said, is because at a crime scene everyone is speaking the same language and using a command in a foreign language allows the dog to distinguish the handler’s command from other voices.

Once the handler and the dog bond, he said, “That’s your dog forever. He’s going to sleep in that room with you, you go to the store he goes with you; when you’re in K-9 school, when you go eat, the dog goes too. That’s your partner until something happens to him or you retire.”

He said the commands he gives X-on determine what scents the animal will look for.

“Whatever you give him the command to do it, he’ll do it.”

During the day, the pair are on patrol and assist other officers as needed. And they constantly train.

“The good thing about it, my dog, when we pull up the house, he’ll know we’re not at work any more, and he’ll run in the yard. He won’t leave. In the morning when we jump in that vehicle, he knows it’s about work. He won’t let anyone around the vehicle, he’s very protective.”

But there is one problem.

“With these dogs, you have to let them spend that energy,” Young said. “If you don’t, they get aggressive and they start tearing up the truck because they want to do something. They want to go all the time. It’s either 100 or zero, and they hate zero, so they like to be active at all time always ready.”

It means he gets a lot of exercise.

When Young and X-on are called to the site of possible bomb, both of them rely on their training with explosives.

He said that training helps when he and X-on enter a building.

“Even though I’m in a civilian role, I still look at it as a military role because when I go in a building, I’m looking at everything I’m looking for any kind of booby traps, because when we go into a situation, we don’t know what we’re going to find we have to go in there and deem it safe for the public,” Young said. “He sniffs for explosives. My job is to watch X-on, X-on’s job is to watch me.”

Once they enter an area, he will give X-on the command to search.

“If its a closed building, I’ll turn him lose and let him look for it; sometimes I’ll keep him on a leash and go that way. In a closed space, he’s going to be on a leash. If it’s an open area, I’ll let him go, he’ll give me the alert and I’ll know what the alert is. We’ll go over there and make sure it’s an acutal device and come back and tell what we have and the powers that be will take it from there.”

Young said he’s not sure when he will retire, adding he loves his job, “But when it’s time for me to go home I’m going to enjoy going to home.”

And he’ll have an extra companion. X-on, he said, is due to retire sometime next year and will go home with him.

“He’ll be able to relax, lay out in the yard and hangout with me.”