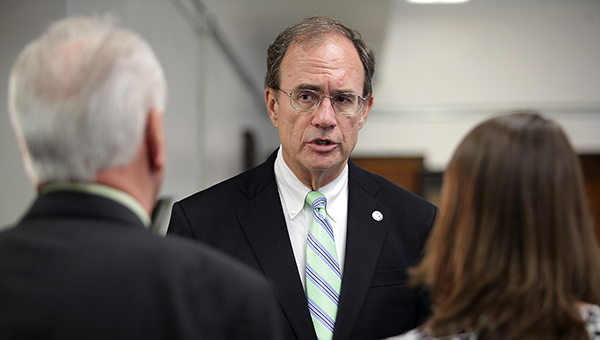 Mississippi’s Secretary of State has led state through changes

And getting elected Mississippi Secretary of State is a big step for a boy from Vicksburg.

A Warren County native who traces his family history in the county back to the 1800s, Hoseman graduated from St. Aloysius in 1965, the University of Notre Dame, and the University of Mississippi Law School in1972. He also earned a master’s in taxation from New York University. Following his father in the legal profession, he worked for 35 years as a private attorney before deciding to throw his hat in the ring for secretary of state. He was re-elected in October for a second term.

“I was basically a business lawyer,” he said. “So I did work with small business and medium-size businesses on their corporate structures and limited liability companies — LLCs, financial mergers, acquisitions, real property.

“When Secretary (Eric) Clark decided he wasn’t going to run again that gave me an opportunity to rewrite all the laws I had been working under.

But his biggest triumph was in an area he knew little about when he was elected — election law — getting federal court approval to allow the Legislature to redistrict the state and a voter ID policy that withstood U.S Justice Department scrutiny.

“We have a history in Mississippi of denying people the right to vote, so we needed voter ID to be done in a way every Mississippian felt they were enfranchised to cast a ballot,” Hosemann said, adding the state’s law allows many different forms of IDs for voters.

“I think it’s historical, that we in Mississippi were able to balance our history with the future. We were turning a historic page. That was important to me.”

Hosemann and his wife live in Jackson, but he still makes it back to Vicksburg regularly, he said.

“Mom still lives on East Avenue, so I’m over there quite a bit, actually.”

Called the “Art Park of the World” by a Civil War veteran, the Vicksburg National Military Park is a jewel... read more