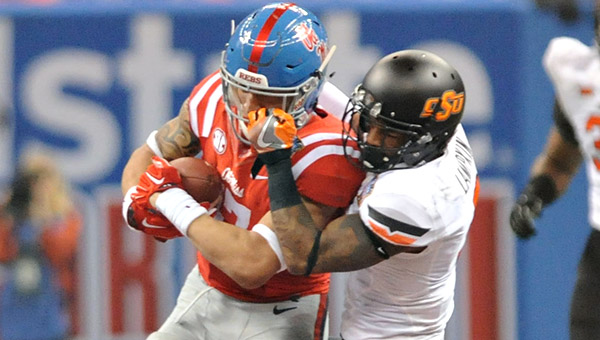 Chad Kelly threw for 302 yards and four touchdowns — three to Laquon Treadwell — and No. 16 Ole Miss beat No. 13 Oklahoma State 48-20 in the Sugar Bowl on Friday night.

Ole Miss (10-3) jumped out to a 34-6 lead by halftime, cruising up and down the field against an overwhelmed Oklahoma State defense. The onslaught was punctuated late in the second quarter when left tackle Laremy Tunsil had a 2-yard touchdown run on a trick play after a lateral from Kelly.

“To stand here and win the Sugar Bowl with these guys, it’s the memory of a lifetime,” Ole Miss coach Hugh Freeze said on the field after the game.

Oklahoma State (10-3) lost its final three games after 10 straight wins. The Cowboys fell into a 41-6 hole midway through the third quarter and never mounted a legitimate challenge.

Ole Miss was embarrassed a year ago in a 42-3 loss to TCU in the Peach Bowl and players vowed throughout the past month that the outcome would be much different.

Ole Miss started off a little shaky after a couple early penalties helped Oklahoma State advance down the field. The Cowboys eventually kicked a short field goal for a 3-0 lead.

That was the end of the good news for the Cowboys, who were playing in the Sugar Bowl for the first time since 1946.

The Rebels’ offense got on track later in the first quarter when Kelly hit a wide open Cody Core for a 31-yard touchdown that made it 10-3 and started the onslaught.

Treadwell added two touchdown catches in the first half and also completed a 45-yard pass after a lateral on a trick play. His second touchdown catch gave Ole Miss a 24-3 lead.

The Ole Miss fans — who were cheering for the Rebels at the Sugar Bowl for the first time since 1970 — were already in a frenzy when one more trick play by Freeze brought down the house.

With 5 seconds remaining in the second quarter, Kelly ran right and then fired back across his body to the 305-pound Tunsil, who caught the lateral and jogged into the end zone for a 2-yard rushing touchdown.

Ole Miss fans roared and the “S-E-C! S-E-C!” chant started in the Superdome: The Rebels had scored on their final six possessions of the first half and this one was essentially over.

For Oklahoma State, it was a rough ending to what started as a promising season. The Cowboys were in the middle of the playoff conversation in November after 10 straight wins, but losses to Baylor, Oklahoma and then Ole Miss exposed their defense. They gave up a combined 151 points in those three losses.

This was the third time in 11 seasons that Ole Miss has beaten Oklahoma State in a bowl game. The Rebels won when the teams played in the Cotton Bowl in both the 2004 and 2010 seasons.

Ole Miss won nine games in back-to-back seasons for the first time since 1961-62, and its first Sugar Bowl since 1970. Freeze said the vaunted 2013 recruiting class will get credit for the turnaround, but he was happiest for the seniors he inherited that stuck around to see it through.

“My emotion is probably going to be the most difficult, not so much for that (2013) recruiting class, but for the C.J. Johnsons and the Woody Hamiltons and the Aaron Morrises and the Justin Bells, who suffered some very discouraging losses before we got here,” Freeze said. “They hung with us and got to go from that to winning the Magnolia Bowl, Egg Bowl and Sugar Bowl all in one season. Those seniors get to go out with that. That’s folklore stuff.”