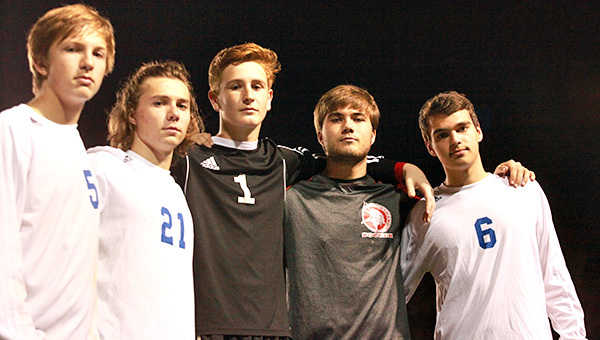 Brian McHan likes his job as Warren Central’s starting goal keeper. Making a highlight-reel save or diving to knock away a well-placed penalty kick and being the center of attention for a fleeting moment is what the position is all about.

McHan, though, hasn’t had many of those moments this season. Thanks to Warren Central’s suffocating defense he barely has to do anything at all.

The starting defense — seniors Elliott Stockett and John Austin Burris, and juniors Carlos Jesser and Jacob Cochran, plus the senior goal keeper McHan — has posted 11 shutouts in 16 games this season. The Vikings (13-2-1) have allowed one goal during the eight-game winning streak they’ll ride into Tuesday night’s Division 4-6A championship showdown at Clinton.

Their work has often turned McHan into a bystander, but it’s something he’s learning to appreciate.

“We have a defense that’s tops in the state. The less work I have to do, the better we’re doing,” McHan said. “When we have a shutout, it’s a game without many mistakes. It’s something we take a lot of pride in.”

Being a defender in soccer is often a thankless job, and a paradox. Coaches typically put their most skilled players on the back line, where they rarely get to grab the headlines of their goal-scoring teammates.

Even from a statistical standpoint their contributions are hard to quantify. While forwards and midfielders can be ranked by how many goals, assists and shots they generate, defenders are measured by how few the other team gets.

Opponents of Warren Central are not getting many.

In two wins last weekend over Vicksburg and Greenville, the Vikings gave up one shot. McHan had 134 saves in 21 games last season and has only had to make 41 so far this year. Of the 12 goals the Vikings have allowed this season, nine came in their two losses to state powers Northwest Rankin and Tupelo.

“This year, we’ve definitely been moving the ball a whole lot better and playing better soccer, period,” Burris said. “To us, we’re shut-down guys and that’s the mentality you’ve got to have.”

Stockett said the defensive success has come from working as a unit. In practice, he said, the defenders often do drills where they shift and move in unison. The idea is to turn them into one collective mind where they know what the others are going to do before they do it.

“That’s the reason we’re doing good. We move as one complete unit,” Stockett said. “We practice our whole line moving everywhere we go, staying in our formation at the same time.”

While the Vikings’ defense has emerged as one of the best in Mississippi, they’re not exactly gutting out 1-0 wins. Ten players have scored multiple goals this season, and they’ve scored four or more goals in nine of their 13 victories.

The combination of a lockdown defense and high-scoring offense has turned the Vikings into something they’ve rarely been — a state championship contender.

Warren Central has only won one playoff game since 2004, and none since 2010. Typically, it has been good enough to easily earn a postseason berth in Greg Head’s 12 years as coach, but runs into a superior team in the first round and quickly bows out.

This time around, the Vikings seem poised to break that pattern — if they can beat Clinton on Tuesday.

Like its playoff resumé, Warren Central’s history with Clinton has not been good. A win in 2010 was its only one in the rivalry since 2004. Clinton, however, is limping into this year’s matchup with a 3-10-2 record while Warren Central is flying high.

A win would send a message to the rest of Mississippi that the Vikings are for real.

“If we win this one, it’s going to be confidence that we’re going to be able to compete,” Head said. “They’re ready to play them. A lot of times when you’re playing teams like Clinton or Northwest Rankin, it’s always that thought in your head that they have all these select players and play year-round. We don’t even have rec players. There’s that thing in their head that they don’t know if they’re good enough. We’ve just got to get them fired up and ready for Tuesday, and I don’t think I have to do anything because these guys are ready to win.”

• What’s at stake: Warren Central’s boys’ soccer team can clinch just its second division championship since 2004 by beating longtime nemesis Clinton. The Vikings have only beaten Clinton once in the last 11 years.

A two-car collision Sunday afternoon claimed the life of a Vicksburg native and led to charges for another. Vicksburg police... read more