After years of striving, downtown is thriving 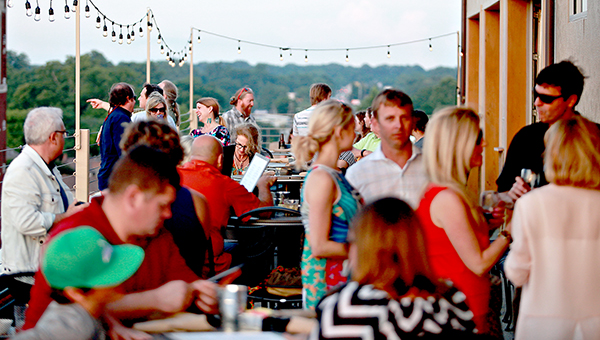 ROOFTOP: Patrons enjoy an evening at 10South Rooftop Bar and Grill, one of many restaurants that have opened downtown in recent years.

Downtown Vicksburg has undergone quite the transformation in recent years because of the hard of work of multiple people looking to better the city.

Occupancy rates in downtown have shifted dramatically over the past couple of years. A vacancy percentage somewhere between 65 and 80 percent was reported in downtown just a few years ago.

Now city and downtown officials report a vacancy rate of only 5 to 15 percent. That number varies depending on to whom you talk. Neither the Vicksburg Main Street Program nor the city could provide exact statistics.

The fact remains multiple individuals have invested their time and money into downtown, and working together, Vicksburg has begun to thrive in ways that could only be imagined just a few years ago.

The Vicksburg Main Street Program was introduced to the city in the mid-1980s. Current executive director Kim Hopkins has worked with the program’s board of directors and the city to enhance the vitality of downtown.

“I strive to encourage investors to recognize that the appearance and economic viability of the downtown business district reflects on the image of the entire community, both to its own citizens and to those who visit here,” Hopkins said.

The program started an Economic Restructuring Team that has worked to develop business downtown. In 2013, the team’s goal was to have 100 percent occupancy in 10 years. Just three years later, the occupancy rate has dropped drastically.

“Downtown is so much more than a small community. It is an incubator for small businesses,” Hopkins said. “Since we implemented this Economic Restructuring strategy, I have enjoyed the increase traffic downtown is experiencing.”

Vicksburg Mayor George Flaggs Jr. said when he took office, downtown was like a “ghost town.” He gave much of the credit for the reduced occupancy rates to the Main Street program and Hopkins.

Flaggs said since he took office he has worked to encourage downtown growth and to change the mindset of downtown with Main Street.

“We promoted the importance of investing in downtown, and we gave tax incentives for people toward rebuilding downtown or starting businesses downtown with Main Street,” Flaggs said.

Flaggs himself sold his house and moved in a downtown apartment. He loves the convenience of the living in the middle of the city.

Main Street Board member Skipper Guizerix said three or four years ago, it was novelty to live downtown, but now it has become customary and there is a growing demand.

He said tourists remember their first impression of an area and often times those impressions center on downtown. Vicksburg is fortunate to have Washington Street, he said.

“When realtors try to sell you a house, it’s all about curb appeal, and Main Street is our curb appeal. It’s the first thing you see and it’s the last thing you remember,” Guizerix said.

Live! Work! Play! Downtown Vicksburg — the company name of owners Mary Jane Wooten and Daryl Hollingsworth — have renovated several downtown Vicksburg buildings. Two apartment buildings, The Courtyard Lofts and The WareHouse, and two places to eat, The Wine House and The Mad Baker, were brought to downtown by this duo.

“We are regulated that the downstairs portion of them have to stay commercial and so on the backside and up top or below we can provide residential,” Wooten said. “So we have been trying to turn as much of that other space into residential living spaces as we can.”

They have been working to bring a balance of residential living space to downtown while also implementing businesses that those residents might benefit from being able to walk to like restaurants and grocery stores.

In Vicksburg, and many other places, driving to shopping, dining and work are typical, but the idea to create a space downtown where someone can potentially walk from their home to work, food and shopping is an intriguing possibility.

“Everywhere else in Vicksburg, you have to get in your car to actually go somewhere, but that’s not true downtown,” Wooten said. “You can actually live downtown and if you want to go to dinner or an art gallery or a museum or the coffee shop or the bakery, you just walk down stairs and walk to it.”

Two years ago there was about an 80 percent vacancy rate in commercial properties downtown, Wooten said. She said the interstate took a lot of business from downtown with merchants wanting to be closer to an area with more through traffic.

The goal was to build what their renters requested, which were a unique restaurant and a place for breakfast, sandwiches and bakery foods. In response, the two developed and opened The Wine House and The Mad Baker. Wooten said the vacancy for commercial properties is less than 15 percent now, adding there are 10 restaurants in downtown.

“It’s providing a different niche that Vicksburg has never been able to provide before,” Wooten said.

At this point, Wooten is looking to bring a grocery store to downtown, and Hollingsworth is finishing up the final two apartments located above the bakery.

As for the residential properties, she said there are more than 350 people living downtown and there are no vacancies at this time as far as she knows.

“You just continue to build on that, and if what you’re doing works, you keep doing it,” Wooten said.

As for the next building the duo plans to purchase, she first wants to hear the analysis of The Retail Coach, a national retail consulting, market research and development firm based out of Tupelo that was hired by the city earlier this year to help draw retail business to Vicksburg.

Wooten said her next steps would depend on what the company finds in their evaluation of the entire city. In addition to attracting business to town, the company will also work with existing shops to help keep them here and reinforce their business.

Hopkins and Vicksburg Main Street’s board of directors will also be working closely with the consultant to learn the best choices they can make to continue to grow downtown.

“I would love to see downtown finished this next year,” Wooten said.

Tim Cantwell has also been a large part of the revitalization of downtown through his work renovating the First National Building into The Lofts at First National, as well as collaborating on the rooftop restaurant.

“We designed, developed and installed the 10South Rooftop Bar & Grill in partnership with Jay Parmegiani in an effort to create an attraction that all of the folks of the Vicksburg area would be proud of and want to bring all of their friends and family to come in and try,” Cantwell said.

Before Cantwell bought the building, it had served as the bank’s headquarters and housed multiple different offices for lawyers, doctors, accountants and other businesses. By the time he purchased the building eight years ago, it was largely vacant aside from the bank, which is still located on the first floor, and one law firm that eventually moved out.

Now, every loft is occupied and the restaurant is considered a destination to tourists and locals alike.

“The building’s full. The restaurant’s thriving and the bank is positioned to be there for another 20 years,” Cantwell said.

Bobbie Marascalco, owner of Peterson’s, just celebrated 15 years in downtown Vicksburg. She said she opened her store downtown before the streets were renovated in 2001. She owned the building for years and when the tenants moved out, she decided to open her own store of art and antiques.

Marascalco enjoys the location and the changes she has seen to the area over the years. When the riverboats dock just a few blocks away, she said she has customers from around the world.

“I love it. I meet a lot of neat people, see a lot of people from town that I’ve know for years and yet we have a whole lot of tourists,” Marascalco said.

Over the years, the store has gone through changes when the economy dipped and people weren’t buying art. Now she mostly sells children’s toys and food items. Business, she said, depends on the time of year and the weather, which is constantly changing. She said she has no plans to leave downtown.

In the past two years she has seen at lot more activity downtown, especially in the evenings. She said it’s not just restaurants either with River City Tumble & Cheer and Crossfit Bayou Bluffs.

“When we get off work at 5 p.m., there’s hardly a parking spot on the street,” Marascalco said.

In September, Vicksburg was named a semifinalist with nine other Main Street organizations from around the country. The National Main Street Association chose Vicksburg, in part, because the downtown vacancy rate has been so drastically reduced, public and private investments have been made totaling $150 million and 3,100 new jobs have been created since the Vicksburg Main Street Program began its work 31 years ago.

In May, Hopkins will attend the National Main Streets Conference in Milwaukee where the national organization will name the three winning cities.

Vicksburg was recently placed at the top of a list cultivated by a website that generates rankings on what each state has to offer.

Onlyinyourstate.com is a website that posts articles ranking certain attractions, food, history, lifestyle and other elements from each state. Recently, Vicksburg topped the list of 10 towns in Mississippi with “must visit” Main Streets.

“Anything positive getting out about Vicksburg helps,”  Hopkins said. “Every positive story on us helps.”

Hopkins said the website did not contact her about receiving the top spot, but someone else showed her where the honor was displayed online.

Vicksburg also placed fourth for The Old Court House Museum and in eight for the Vicksburg National Military Park on the list “12 Amazing Field Trips Every Mississippian Took As A Kid… And Should Retake Now.” Multiple articles can be found on the website with Vicksburg popping up on different lists for its bed and breakfasts and haunted mansions.

The website does not state the method used in ranking the cities.