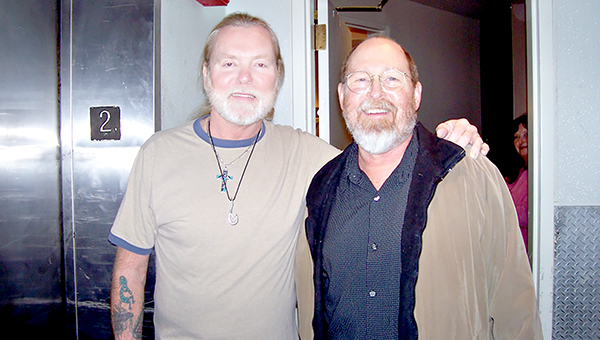 FAMOUS FRIEND: From left, Gregg Allman stands with David Reid. Allman came to Vicksburg in October 2007 to meet Reid, who carved the Remember Duane Allman tribute into the raw earth along Interstate 20 in the 1970s.

Daniel Boone has been offering screenings of art house films since 2011 at the Strand Theatre. These films have included operas, ballets and festival winners.

Tonight, he will be showing “Once Upon A Time in the West,” a movie, which holds a special meaning to the local film aficionado.

“Once Upon a Time in the West” was a favorite of David Reid’s, Boone said. Reid died of cancer in 2007 and was a friend of Boone’s.

Growing up, Boone said the two men’s paths did not cross, since Reid was a few years younger, and they went to different high schools, but later in their 20s, the men would see each other around town.

“He worked in a record store, and we would talk. David loved to visit and discuss things that interested him. He was an enthusiast. If he liked something, he wanted to share it — music, books and movies.”

In the 1980s, Boone said he got a videocassette recorder, and it was this piece of innovative technology that deepened the men’s friendship.

“I mentioned to him I had just gotten one of those newfangled VCRs. His eyes lit up because there was some movie he would really like to see. I said, ‘well, I can bring the VCR over to your house.’”

Boone went to Reid’s house with VCR in tow that evening, he said, and ate dinner met the family and watched a movie.

“That was the first of dozens, if not hundreds of times I lugged the “machine” over there, even though the video recorders were only slightly smaller than a Volkswagen Beetle at the time. I became part of the family. We would all watch something together, and then the rest of the family would go to bed, and David and I would stay up late watching more — old movies, foreign movies, strange movies.” Boone said.

Although the men’s taste in films was not always the same, Boone said, they enjoyed sharing movies they each liked with one another.

“David would often speak of one movie he really wanted to see again that was not yet out on video, ‘Once Upon a Time in the West.’ One day we saw it was going to be on satellite, and we watched it together as we recorded it, finger on the pause button to eliminate the commercials.”

“The action revolves around the efforts of a railroad baron to acquire a few key pieces of land by whatever means necessary. Henry Fonda rocks as the most despicable villain of his career. It is a wonderful, maddening, rewarding, annoying film,” Boone said, adding he and Reid talked about it at length afterwards.

Reid, who Boone said became notorious in the early 1970’s when he and three cohorts carved “Remember Duane Allman” into the raw earth along Interstate 20 and the more than 100-foot length message was featured in the Rolling Stone magazine, wanted others to be able to view his favorite movie.

“His desire to share drove him to arrange a screening of “Once Upon a Time in the West” out at the movie theater at the mall. It had to be after the normal shows were over for the day, which meant it would be after 10:30 p.m. when the more than two-hour film was shown. This was in the days long before the Internet, so he promoted it however he could. A handful of friends and other interested parties came out. I helped underwrite the licensing costs. It was my first experience with presenting films in a nonprofit capacity,” Boone said.

For the showing of Sergio Leone’s classic spaghetti western, Reid’s family will be coming back to Vicksburg for the screening, Boone said.

“I know David would be pleased that we would gather in his name to share this movie.”

In addition to honoring Reid with the screening, donations will also be accepted for the Culkin Volunteer Fire Department.

“David lived in Culkin and was active in the fire department in its early days,” Boone said.

Area churches are gearing up for Holy Week through sunrise gatherings, services and lunches throughout the coming week including Maundy... read more