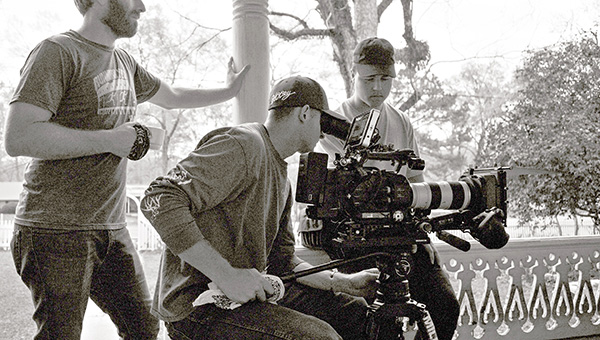 LIGHTS, CAMERAS, ACTION: Filmmaker Travis Mills will soon be in Vicksburg to find potential locations for his next film.

Travis Mills has a goal of making a feature film every year in Mississippi and currently the director is shooting in Brookhaven. On Friday, he will make his way to Vicksburg to scout out potential locations in town for his next film in addition to offering a question and answer segment, following a screening of his last project, “Durant’s Never Closes,” which will be offered at 7 p.m. at the Strand Theatre, 717 Clay Street.

The Arizona based independent filmmaker said Vicksburg is one of 21 cities that will be showing “Durant’s Never Closes,” which stars Hollywood actors Tom Sizemore (“Saving Private Ryan”) and Peter Bogdanovich (“The Last Picture Show”).

“I have basically been setting up screenings of the movie across the country, but the Mississippi screening is a little bit more important because we are making movies here,” Mills said.

Mills, who lives in Phoenix, has family ties to Mississippi and said he considers Mississippi a special place, and is hoping to start a second film base in the state —specifically in Brookhaven, but he said he was open to shooting all over the state.

With his grandfather still living in Brookhaven, his mother growing up there and attending school there himself for a short period of time, Mills said he has been coming to Mississippi all of his life.

It was about a year and a half ago on one of his trips to the Magnolia state, Mills said that he met up with some of the members of the Brookhaven Little Theatre and decided it would be a good idea to do a feature film in the town.

“Porches and Private Eyes,” a small town comedy/murder mystery that Mills wrote is currently being filmed there now.

While in Vicksburg, Mills said he was hoping to see if there are any potential areas of the city viable for a 2017 movie project.

Admission to the screening of “Durant’s Never Closes,” a film Mills described as a crime/drama, is $5 in advance at the Highway 61 Coffeehouse and $7 at the door.

“The show is like a character study of this guy that runs a restaurant, and he was associated with the mob. He is very conflicted man, who has gone through a lot and is looking at his work relationships and his romantic relationships and the crime stuff he might be involved with,” Mills said.

“I hope Vicksburg comes out to see the film and asks questions. We try to support local and regional independent filmmakers as part of our mission to bring projects that our audience might otherwise not have a chance to see. Also, we feel that getting to meet the people who create the films gives us a deeper understanding of the process of making movies,” Strand film programmer Daniel Boone said.

When a pledge is made to serve a community, it’s carried out through the end. While the final destination for... read more