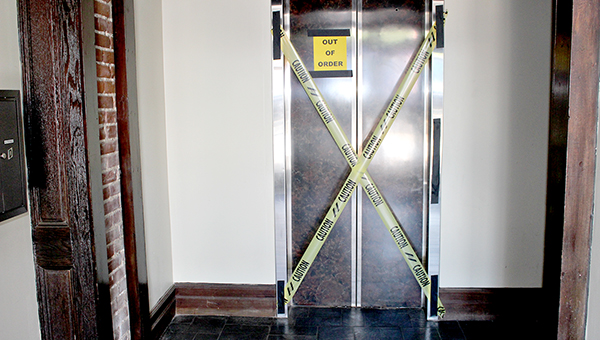 HEAD TO THE STAIRS: Crossed yellow caution tape and a sign tell people the elevator to the depot museum is out of order. It has been ordered closed until repairs are completed.

State officials have ordered the city of Vicksburg to close the elevators at the water treatment plant and the Yazoo & Mississippi Valley Railroad Depot because they are safety hazards, Mayor George Flaggs Jr. said Friday.

“One has already been taken out of service,” Flaggs said, referring to the elevator at the city’s 47-year-old water treatment plant on Haining Road.

“The state has an (elevator) inspector that comes around, and I’ve been notified by the (city) building (and maintenance) department that the Depot elevator is inoperable. I apologize for the inconvenience at the depot for those of you who go to the museum. It’s going to cost a lot of money to fix it.”

He said city officials have not yet seen the inspector’s report outlining the problems.

Flaggs comments came Friday morning after the Board of Mayor and Aldermen took under advisement two bids to repair the elevator at the water treatment plant.

The elevator has been shut down since August, when a short in the elevator’s system knocked out power to the water treatment plant, forcing city officials to declare a boil water notice.

“When it shorted out and blew out all the main switches, I shut it all down,” Public Works Director Garnet Van Norman said. “A new one needs to be put in. It’s as old as the plant, and they always were having some kind of issues with it.”

The Depot elevator is blocked by an “X” of yellow plastic caution tape and a sign saying, “Out of order.”

At various times over the past five years, people have been trapped in the elevators on the second and third floors because the doors jammed. It too has had other problems.

The city has received a total of $537,475 in Transportation Alternative Program grant funds to cover 80 percent of costs to repair problems at the depot, including replacing the elevator. The grant is a reimbursement grant, which means the city will pay for the work and be reimbursed.