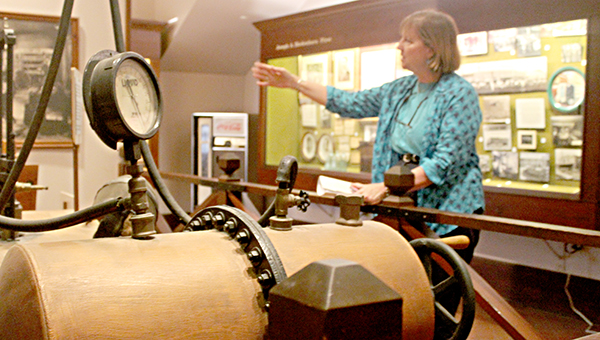 HISTORY IN THE MAKING: Nancy Bell explains how special equipment was once used to bottle the first Coca-Colas in Vicksburg.

Supreme Court Justice Oliver Wendell Holmes said Coca-Cola “means a single thing coming from a single source and well known to the community,” and that could not be more true for Vicksburg.

The Museum of Coca Cola History and Memorabilia, 1107 Washington Street, is where Coca-Cola was bottled for the first time in 1894 at the Biedenharn Candy Company.

“(Joseph A Biedenharn) would bottle his own soda water. He would bottle a case, he would take it to people out in the country in his horse and buggy,” Vicksburg Foundation for Historic Preservation executive director Nancy Bell said. “People out in the country wanted to know why they couldn’t get Coca-Cola. Why could he bring them a case of strawberry when the Coke was really better?”

Biedenharn bottled some Coca Cola and sent it to Atlanta to ask for permission to sell it in a bottle. The company agreed.

“That’s really what launched Coca Cola, the ability to get it anytime, anyplace,” Bell said. “Really, if you think about it, it sounds like they didn’t think it through, but soda fountains were the thing of the day. I can understand why they would think bottling wouldn’t have been successful.”

Biedenharn created a new concept of marketing and selling the drink and established the cornerstone of the independent network of franchised bottlers who now distribute bottled Coca-Cola all over the world.

His old candy shop now serves as a history and memorabilia museum and includes history such as some of the first bottles, bottling equipment and an ingredients list that shows cocaine was once a part of the formula.

Though there are no more Cokes bottled in Vicksburg, patrons can purchase bottled Coke products or even a Coke float. Coke memorabilia is also available for purchase.

Hours for the museum are Monday through Saturday from 9 a.m. to 5 p.m. and Sunday from 1:30 p.m. to 4:30 p.m. The museum is closed New Year’s Day, Easter, Thanksgiving and Christmas.

Editor’s Note: This is the first in an ongoing series highlighting museums in Vicksburg.

Holiday travel on the rise