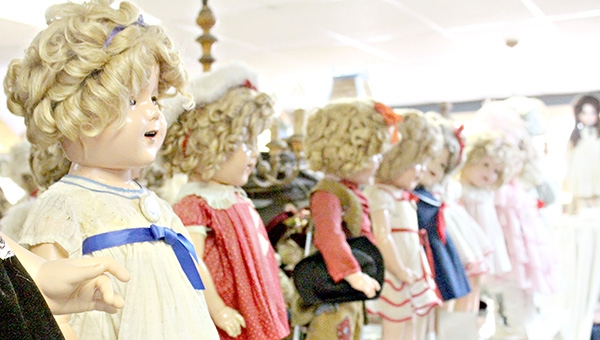 After her beloved collection turned out to be too much to enjoy herself, Carolyn Bakarich decided to share her treasures by opening a museum in downtown Vicksburg 30 years ago.

Yesterday’s Children Antique Doll and Toy Museum now has more than 1,700 dolls and an assortment of other vintage toys and memorabilia.

Although Carolyn Bakarich passed away in October of 2014, her legacy lives on through her husband Mike Bakarich who serves as business manager at the museum.

“The reason we established the museum is we needed to have room to sit down in the house,” he said. “She was a collector, and she’s always been into dolls. The museum meant so much to her that we the family decided to keep it going.”

Bakarich said the museum seems to mean a lot to many of the visitors who pass through its doors as well.

“We had a lot of visitors today from the riverboat,” he said. “These ladies were yelling with ecstasy, ‘Oh my gosh! Look at the dolls! There’s my Chatty Cathy!’”

That’s what makes it worth it, Bakarich said.

“They have a ball going through here,” he said. “We feel obligated not just for my wife, but for the public, to keep it going.”

Some of Carolyn’s favorite dolls were French and German dolls made in the late 1800s and early 1900s. The museum holds one of the largest collections of those dolls in the United States.

Her doll collection extends to include a number of Shirley Temple, Madame Alexander, Play Pal, Ventriloquist dolls, mid-1800s China head dolls and Annette Himsted life-like dolls. People traveling all over the world have also donated souvenir dolls to the museum.

Toward the back of the museum, there’s also a section devoted to husbands, where there are no dolls, but rather action figures.

Bakarich said he’s thankful for all of the offers from women around town and members from Hawkins United Methodist Church to help volunteer in the museum.

Admission is $3 for adults and $2 for children 12 and under. Special group rates are available for parties of 10 or more.

Editor’s Note: This is the third in an ongoing series highlighting museums in Vicksburg.