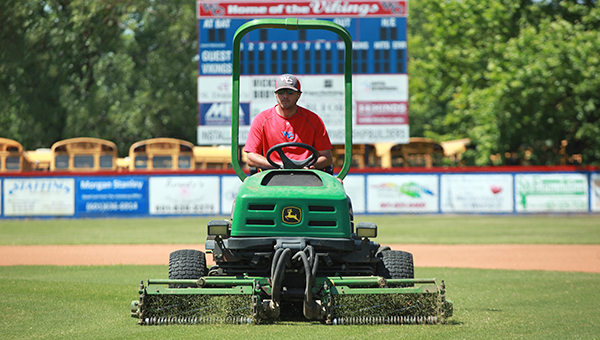 On a darkened bus, zipping southbound down I-55, Warren Central’s baseball team was buzzing. It had just beaten DeSoto Central, the star-laden eventual state champion, to stay alive in the state baseball playoffs.

Players and coaches replayed the highlights amongst each other and turned their thoughts toward the next day’s decisive Game 3 in the best-of-three series.

Well, not all of them. In his seat, Brooks Boolos had more pressing matters to take care of.

“I had to memorize a poem for my English class,” he said with a laugh.

“Everybody is happy, and I had to memorize a poem. It definitely makes you move on.”

Such is the life for anyone involved in high school athletics. Finding ways to get the job done on and off the field, and find a balance between sports, work, academics and life can be a bigger challenge than hitting a 95 mph fastball.

“You have no time for anything,” said Boolos, a 2016 graduate who started for Warren Central’s baseball team for four years and also played football. “Both (sports and classwork) are time consuming, because after school you’re practicing for three or four hours sometimes. All you want to do other than that is sleep.”

along with game plans

Trying to find a balance between sports and classwork is nothing new for student-athletes. Past generations of athletes often played multiple sports throughout the year, flowing from one season to the next with very little time between.

What has changed in modern times is an emphasis on year-round training and specialization that forces players to structure their schedules to the minute. Once class lets out, it’s time for practice and then homework and studying into the evening.

And that’s in the offseason. During the season, things get even more hectic. Games are often played on weeknights and don’t end until around 9 p.m. Players might not get home until after 11 if it’s a road game. That means cramming in study time wherever and whenever they can.

“Fall is the offseason and you’re still out here an hour and a half,” Warren Central baseball player Conner Wilkinson said. “The season rolls around and you get one day off a week, if you’re lucky. Then you’d better pack your books on the bus. I guarantee you everybody on this team has done homework on the bus.”

Part of a coach’s job is to make sure his players have time to succeed in the classroom, which means making sure they have time to do their coursework. That’s a necessary, but delicate task for a person whose job depends on their players also being as skilled as possible on the field.

Being prepared and organized at practice is a must, coaches agree. A structured and disciplined team can have a crisp two-hour practice that accomplishes more than a disorganized team does in three. That’s a philosophy that extends throughout the school building, Porters Chapel Academy baseball coach and athletic director Wade Patrick said.

Coordinating with teachers to make sure players get missed assignments and keep up with their classwork allows coaches to keep tabs on one of their most important duties.

“We just make sure they have assignments before they leave for a game if they have to miss a class or two,” Patrick said. “It’s hard to take care of, but you have to put it out there and make sure they do it. Sometimes you don’t know they haven’t done it unless you hear from the teachers.”

Modern technology also helps. The web-based HUDL system, for example, allows players to watch game film online on their own time. That can shave some time off practice by eliminating some team film sessions.

“We like to be extremely organized and understand what we’re trying to get done and get them out of there,” Warren Central football coach Josh Morgan said. “We can send film home with them and we give them stuff to go home and study. With their phones and the internet nowadays, they can watch film online. There’s a lot of things they can do that we don’t need to have them here all night to get done.”

While players try to balance homework and sports, the men and women leading them are juggling even more.

High school coaches are also teachers. They arrive at school around 7 a.m. for their “day job” and then head off to practice when the final bell rings at 3 p.m. Several hours of practice, games and other duties follow, culminating in an exhausting 12-15 hour daily grind that lasts for four months.

“During the season it gets pretty long. After a while, it’s about being prepared. As a coach, I love the practices,” St. Aloysius football coach BJ Smithhart said. “It becomes a grind for players and coaches, but it’s a good grind.”

A coach’s job entails far more than blowing a whistle and calling plays. Football, softball and baseball coaches are entrusted with a large amount of field maintenance such as cutting grass and painting the field.

More hours are spent lining up sponsorships and fundraising, scouting, drafting game plans, watching film and other small tasks that quickly eat up the time in a day — all before they grade a single test or paper.

“A lot of times you might go out late at night and line the field off. Lucky for me, I’ve had some great help, especially on the baseball side of it, from parents and other people. That frees me up to focus on other things,” Patrick said. “That’s a lot of the misconception, especially in high school. We’re not out there 100 percent of the time. Five of the seven class periods, we’re inside the school. A lot of people might think you’re coaching all the time, but there’s a lot of things behind it.”

The daily grind of coaching can easily put stress on a family. Hours spent at the ballpark are hours not spent at home with spouses and children.

Having a good partner, coaches agree, is the key to finding some semblance of a balance between work and life.

“My wife is great. She’ll bring the kids out to practice. Eighty percent of the practices, the kids are out there by the end of it and playing with the players,” Smithhart said. “It’s a family atmosphere. Ellis (his 3-year-old son) will go home and put on a football helmet and say he’s Drake (Dorbeck) or Josh (Price).”

At Warren Central’s baseball practice, coach Conner Douglas’ dogs Braxton and Kayden are frequently seen chasing tennis balls or lounging in the shade of the dugout. Other coaches get their children involved as batboys, ballboys or waterboys as they get older.

Balancing the physical, mental and emotional demands of participating in high school athletics is difficult. There are also rewards at the end of the road.

A number of athletes have not only achieved a balance between school and athletics, but have mastered both. Keiyana Gaskin was the salutatorian in Vicksburg High’s Class of 2016 and also starred for the school’s basketball and track teams. She won state championships in the 100 and 200 meters and earned a track scholarship to Southern Miss, while also posting a 4.33 GPA.

St. Aloysius’ 2016 valedictorian was Katie Martin, a swimmer who received an appointment to the U.S. Military Academy in West Point, N.Y. Her valedictorian predecessor in 2015, Luke Eckstein, also is at West Point and was a cross country and track star at St. Al.

Whether it’s a player achieving enough on the field and in the classroom to earn a college scholarship, or a coach seeing his players and team develop into great athletes and people, the are plenty of incentives to keep everyone involved coming back for more.

“It’s all fun. It’s all worth it,” said Warren Central’s Boolos, who has earned a baseball scholarship from Northwest Mississippi Community College.

For coaches, the intangibles make the grind of a season worthwhile.

“It is worth it, because the kids keep you young,” said PCA’s Patrick, a 13-year coaching veteran. “As long as they enjoy it, that’s the main thing. Watching them grow, just to see them through the years, that makes it all worthwhile. If you touch one person and have an impact on their life, that makes it worth it.”