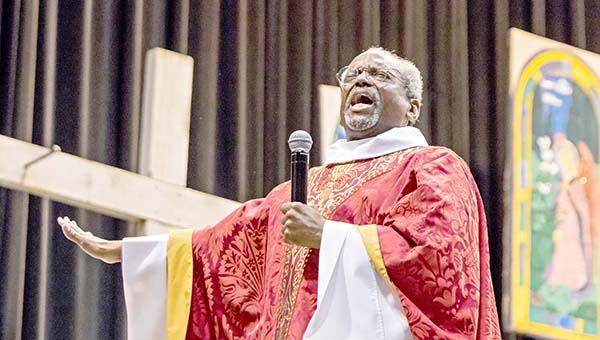 After months of work, St. Mary’s Episcopal Church, joined by the three other Episcopal Churches of Warren County, welcomed the Most Rev. Michael Curry Sunday at the Vicksburg Convention Center.

The Episcopal Presiding Bishop celebrated the Eucharist with hundreds as he delivered a message of love for fellow members of the human race, with special remembrance of the martyrs of Philadelphia, James Earl Chaney, Andrew Goodman and Michael Schwerner.

The presiding bishop based his homily on a reading from Galatians: You are all sons of God through faith in Christ Jesus. For all of you who were baptized into Christ have clothed yourselves with Christ. There is neither Jew nor Greek, slave nor free, male nor female, for you are all one in Christ Jesus.

“The issue was if you’re a Gentile, you have to become Jewish first in order to become a Christian,” he said. “The church actually settled that at what’s called the Council of Jerusalem, but my grandmother would call it a church fight.”

Curry said Jesus came to show people how to become the human family of God.

Curry called his being in Vicksburg an Episcopal revival, and borrowed the words of the late evangelist Billy Sunday to help get his point across.

“It was as he was reading through the Episcopal Book of Common Prayer that he said, ‘Lord, Heaven help the rest of Protestantism if the Episcopal Church ever wakes up,’” he said. “My brothers and sisters, if this church wakes up — if we wake up — we can a profound and transforming difference in this world.”

The way to do this, Curry said, is to remember humans are all a part of the same family.

“I truly believe God sent Jesus to Earth to show us how to stop being simply the human race, and instead how to become the human family of God,” he said. “Treat every woman like she’s your mother because she is your mother. Treat every man like he’s your father because he is your father. Treat them as members of your own family. Show them the love, dignity and honor, the respect you would want for your own kinfolk. Then we can build a society where every man, woman and child, no matter who they are, is treated the same respect, the same equal rights, the same dignity.”

Following the Eucharist, all were invited to attend a reception at The Bluff where Mayor George Flaggs Jr. presented Curry with a key to the City of Vicksburg.