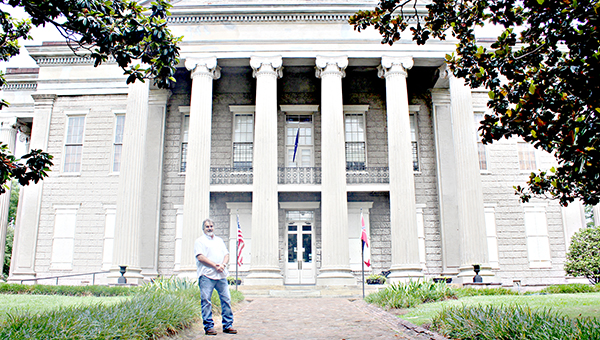 ON DISPLAY: Bubba Bolm is the curator and director of the Old Court House Museum. It was built in 1858 and now houses years of Vicksburg and Warren County History

In Vicksburg lies a building where Jefferson Davis made his first political speech, Ulysses S. Grant gave his victorious speech on the Fourth of July, and presidents Theodore Roosevelt, William McKinley Jr. and Dwight D. Eisenhower  have visited.

Built in 1858, the Old Court House Museum is one of Vicksburg’s most historic landmarks and is listed on the National Register of Historic Places, said director and curator Bubba Bolm. The building itself, however, is just one of the thousands of treasures visitors have the opportunity to experience.

However, had it not been for Eva W. Davis, the museum might not have ever existed.

“They wanted to tear it down, but Mrs. Davis fought for a number of years to take control of this building,” Bolm said. “She knew she could take care of it, she knew its history and she knew what a loss it would be for this community. Her fight was tenacious.”

The county eventually turned the keys over to her, and she opened a one-room museum, that has grown into the massive undertaking that the 68-year-old museum is today.

“It started off small, but it grew to be what it is today though donations,” Bolm said. “There’s not a month that goes by that we don’t receive donations in the form of relics and pieces from families.”

Everything in the building has something to do with Vicksburg and Warren County, and each room has a different theme, from the Siege of Vicksburg, to the art room, and it has rooms dedicated to Jefferson Davis, the Vick family and sports in Vicksburg.

“There’s nothing like it,” Bolm said. “We get people in from Germany, Belgium, the Netherlands, France, the U.K. and every other corner of the world. They are infatuated by our history.”

Bolm said working at the museum has been by far the best job he’s ever had.

“We learn something new every week here,” he said. “Our learning doesn’t stop. We make discoveries about families here, it’s all just very amazing, very interesting.”

The museum is open until 5 during daylight saving time.

Editor’s Note: This is the fifth in an ongoing series highlighting museums in Vicksburg.