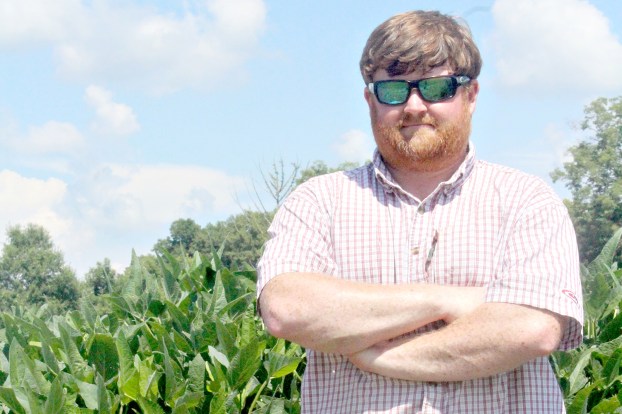 NO COMPLAINTS: Edward McKnight said his 1,000 acre soy bean crop has been doing well despite the dry conditions found in some parts of the county.

Fickled showers bless some, while others wither away

Summer showers are leaving some in the farming, wildlife and forestry industries doing a happy dance, and others are doing a rain dance in hopes their luck will improve.

As the weeks have become increasingly dryer, the percentage of the state registering on the National Drought Mitigation Center’s drought monitor has increased.

More than 80 percent of Mississippi now meets the center’s lowest qualifications for drought. Information from the National Oceanic and Atmospheric Administration places Warren County in the abnormally dry category with a crop moisture deficit ranging from 1 inch to 2 inches last week.

“Some parts of the county have gotten a good amount of rainfall and their crops are looking great. We have some great soybean, cotton and corn crops that are doing really well,” said Anna McCain, the county agent for the Warren County office of the Mississippi State University Extension Service. “In other parts of the county that haven’t gotten the rain some others have, they’re really in need of a good soaking rain.

“You can certainly see differences in crops between where we’ve gotten rainfall and where we haven’t. I expect there will be some (crop yield) losses, but whether those will be significant, I’m not entirely sure.”

Some in related industries said they have started to feel slight effects from the dip in rain.

“We deal with farmers in some ways, but it mostly affects us through soil erosion,” said Monty McGuffie with the Warren County Soil and Water Conservation District of their efforts to plant grasses and other vegetation to prevent erosion along roads and construction areas. “Without rain of course, it’s not going to come up because of the dry conditions.”

“It’s just a chain reaction,” he said. “It’s kept big farms and hunting clubs from being able to plant for wildlife. We had the same situation last year. It’s put a damper on it.”

Bill Tomlinson of Sustainable Resource Managers LLC, a Vicksburg-based wildlife and forestry consulting company, said though he feels drought is often a bigger issue than flooding in the Delta, it’s all about perspective.

“Flooding is more evident, but drought is more pervasive,” he said, noting that the dry conditions mean some in the timber industry have actually gotten a boon from being able to plant in places that were once too wet, but others in agriculture and wildlife are starting to feel the effects.

“We’ve gotten a number of reports of people seeing deer wading into creeks and the edges of lakes that have vegetation growing in them (so they can) graze on that aquatic vegetation,” he said. “It’s not totally abnormal, but it’s telling you that they’re finding that to be more succulent and nutritious than what they’re finding in the woods. They’re showing a preference, which would lean toward (a need for rain).”

Edward McKnight, who farms 1,000 acres of soybeans on Chickasaw Road, said the weather has been treating him well. “It’s worked out for us. It’s been a very cooperative year this year,” he said. “No complaints here.”

McCain said many farms in the area don’t use irrigation, which determines how much rain affects crops, but the crops themselves have become better at dealing with drought.

“While we don’t have control over the weather, we are very lucky to have had incredible advancements in plant breeding over the last 10 years. Some of these varieties have been developed to have greater drought tolerance,” she said.

“While we have not had anyone contact us regarding the lack of rainfall and their crops, we would be more than happy to provide information or assistance to anyone interested in learning about drought tolerant varieties or good irrigation practices for either vegetable or agronomic crops,” she added.

Local McDonald’s owners Melanie and Mike Roach chose to give back to officers who protect and serve the community. All... read more