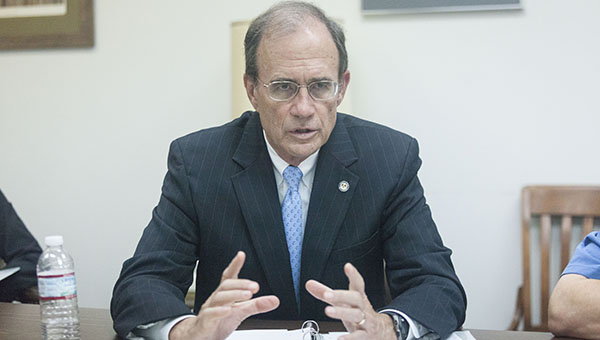 When asked about his political future, Hosemann said he hasn’t made any official announcement but he’s taking a close look at seeking the lieutenant governor’s job.

“I had a number of things I wanted to accomplish as secretary of state and we’ve gotten those started or done those,” he said. “It’s time to look at what’s next and see if there are some other things we can accomplish.”

“We have accomplished a number of things I wanted to accomplish as secretary of state. We have revised all of our business laws. We are making $35 million more a year in revenue from managing our 16th section land and putting those online.

“We have worked to protect the Mississippi gulf coast tidelands. We own 31,000 acres of tidelands and most of two islands and we have secured those as public domain for our children and grandchildren,” Hosemann said.

One of his goals was to fully automate the secretary of state’s office.

“We have 700,000 documents a year that are filed electronically with us, which saves taxpayers money and time — and time is money,” he said.

His office also rewrote the laws governing the formation of limited liability companies.

One of his proudest accomplishments is instituting a successful Voter ID program in Mississippi.

Hosemann said he traveled to Washington D.C. to talk with the Civil Rights Division of the Justice Department while putting together the state’s Voter ID program.

He said the state’s Voter ID lets students vote with a university ID. He said some other states do not.

“We will pick you up for free in any county in Mississippi and take you to the circuit clerk’s office and we will issue your birth certificate for free,” Hosemann said.

More than 5,170 free Voter ID cards have been issued in Mississippi as of Monday, he said.

“We haven’t disenfranchised anyone in Mississippi. We’ve enfranchised them. These are people who were discouraged from voting. Now in the state of Mississippi, they have an ID that makes them eligible to vote,” Hosemann said.

He has an interest in those with autism and houses the state’s autism board within the secretary of state’s office since its formation by the legislature in 2015. That board consists of five members, appointed by the governor and lieutenant governor who are charged with investigating and evaluation applications of those seeking licensure to practice applied behavioral analysis; investigate allegations or practices that potentially violate state law; and adopting and revising rules and regulations related to licensure and practice of applied behavior analysis.

“One in 68 children in Mississippi is born with autism, and they have no insurance. They need our help,” Hosemann said.

He said it’s no secret he had some concerns with the last legislative session in Mississippi.

“I had some concerns about this year’s legislative session, and I’m not going to go over all that now. But the people who govern Mississippi need to remain closely focused on legislation that promotes education. I’m deeply concerned about education, hence our visit to Vicksburg last week.

“We also need to create a business-friendly environment and allow people who have individual responsibility to engage in meaningful work. Those two things are critical to me,” he said.

“State government is going to have to be just like we have the secretary of state’s office functioning here, which is at a very high level. We’ve won numerous awards for our website and it gets more than 12 million visitors a year. State government should be slim and trim and operate to the benefit of the three million people in Mississippi who employ us. That’s important to me,” Hosemann said.