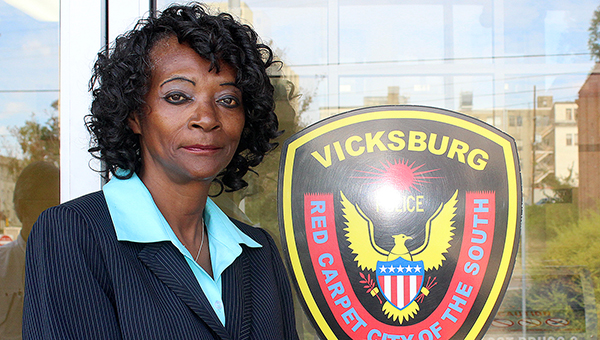 Beverly Prentiss retired after a 35-year career with the Vicksburg police. Her last seven years with the department were served as its domestic violence investigator.

Earlier this month, Vicksburg police Lt. Beverly Prentiss retired from the Vicksburg Police Department, closing out a 35-year career in which she served in several capacities, including the position she held for the past seven years as the department’s domestic violence investigator.

A native of Vicksburg, Prentiss left the area at a young age to live in California, returning home at the age of 24.

“I always enjoyed helping people,” she said of her decision to become a police officer. “I wanted to do the job because I felt I could do well in it, and provide a service to the community, and it was exciting to me. There was never a routine day at the office.”

Prentiss later transferred to the department’s community relations division, then returned to patrol as a watch commander. She was assigned to domestic violence investigation by Chief Walter Armstrong.

“I loved my job, because I could give the victim or the abuser the time they needed to tell me all they had to tell me, whereas being on patrol, you just get the basics and stopped. I’m a good listener, and my role everyday was to try to provide a safe haven for victims of violence and that was my daily activity.”

Prentiss said people are more forthcoming when they are in a one-on-one setting “and will tell you things they wouldn’t tell anyone else, because often times, I let them know what goes on in this room stays in this room and they trusted me.

“Sometimes victims or abusers would just come down and talk. They (victims) didn’t want any action. They’d tell me, ‘I don’t want to sign any charges, but I want to just come down and talk about it.’ They need somebody at every police department because there’s domestic violence going on across this United States and foreign lands.”

As the department’s domestic violence investigator, Prentiss handled most of the protective orders for victims and review cases, and made follow-up calls to the victim to see if there were any services they may need.

“I also worked closely with Haven House which is a family shelter if the victim needed to be housed away from the home,” she said.

She also worked with men who were victims of domestic violence and abuse.

There were also low periods.

“Of course, there were some cases that bothered me more than others, where it dealt with the severity of the victim’s injuries, the children in the home and other things,” Prentiss said. “We’ve had some incidents over the year of victims of domestic violence being murdered at the hands of the abuser. In those situations, if I had (previously) dealt with that victim, and something happened to that victim, it bothered me because I wasn’t able to do more.”

“I had three young men to come to me at different times in my career who told me they appreciated what I did,” she said. “They realized what they were doing was not in the best interest of them nor the victim, and I hadn’t seen them anywhere since in a domestic violence situation. They were given counseling and the counseling helped.”

And the number of domestic violence cases has dropped in the past seven years.

“When I first started, domestic violence cases were averaging anywhere between 600 and 650 cases per year, which were misdemeanors, Prentiss said. “Right now. I believe there are maybe 400. It has helped having a person to go to, having confidence in that person and knowing that you have somebody that you can call.”

Another reason for the drop in cases, she said, is the change in the state’s domestic violence laws and the introduction of protective orders.

“Courts are taking a stricter stance on it, and also abusers are sometimes given jail time as a cooling off period after the incident,” she said. “Right now, abusers know there are consequences behind their actions.”

“Right now, I’m just around the house. it feels good not to have to get up at 5:30 a.m. to come to work. I can get up when I get ready, and don’t have a time limit on anything I have to do. And I can go fishing or I can work in my yard or just do absolutely nothing.”

She said she will miss the people she worked with and “I’m sure I will miss helping those victims who needed help, although I’m always available to give advice. If I seen them somewhere and they ask me, I’m not going to turn my head and say ‘I don’t work there any more.’”

“It will always be in my blood.”

The holidays bring the opportunity to eat, shop, decorate and ring in a new year. Because the holiday season is... read more