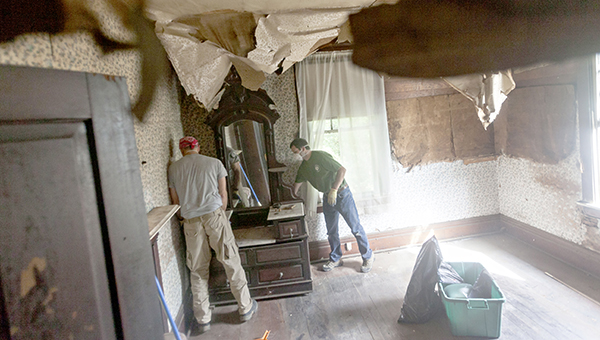 Joseph Holbrooks and David Condlin of Americorps work to clean a room in the McAllister house at 1408 Main St. The Dr. Jane McAllister is being renovated to be preserved because of the historical aspect. Dr. Jane McAllister was the first African American female to get a Ph.D from Columbia University in 1929.

After being a victim of time and vandalism, the two-story home of one of Vicksburg’s prominent residents is slowly undergoing a makeover.

Saturday, AmeriCorps workers and volunteers were at the home of the late Dr. Jane McAllister at 1403 Main St., cleaning the home’s yard, removing debris and preparing it for a fresh coat of paint. Money for the paint was donated by TanTec, a leather tanning company in the Ceres Industria Park.

Dr. McAllister, who was born and grew up in Vicksburg, is the first black woman to get a Ph.D. from Columbia University in education, and one of the first women in the U.S. to get a Ph.D.

“We’re doing this for two reasons,” said Gertrude Young, Vicksburg’s director of housing. “For historic preservation and because of Dr. McAllister’s achievements.”

The AmeriCorps workers had a third reason to help out. Their work was dedicated to Alex Wignall, a former team leader and graduate from the program in Vicksburg who was killed in a car crash in Colorado.

Dinah Lazor with the Vicksburg Heritage Guild, one of the volunteers working in the house, said the project involved stabilizing the building and restoring it to its original condition.

She said it was taking a lot of work to help clean McAllister’s home.

“There was a lot of trash and debris in the house, and it had some damage from vandalism,” she said.

Lazor said one of the Heritage Guild’s goals is to preserve historic African-American homes and neighborhoods in the city.

“Main Street at one time was the prominent black neighborhood in Vicksburg,” said Yolande Robbins, who owns McAllister’s home. “You had educators and business and professional people living in and around this area.”

Besides McAllister and her family, she said, the list of other residents living in the area included Rosa Temple and T.G. Ewing, the city’s first black lawyer, known as “Lawyer Ewing.”

Robbins acquired the house from Betty and Jane Gardener, McAllister’s nearest relatives who inherited the home after her death in 1996.

“They offered it to me if I would try and preserve it,” she said. “I didn’t know how I would do that, because I didn’t have the money. I was doing good to pay the taxes.”

When Young approached her about renovating the home under a city project, she said, she welcomed the opportunity.

The work Saturday did more than just remove debris and cleanup the house. AmeriCorps workers and volunteers uncovered documents and other items belonging to McAllister. Those items included her passport, a photo of her and father and an infant Jane Gardener, and a draft of a will giving the house to the Gardeners. In the place for witnesses, McAllister wrote “Rags the dog unless someone else comes to the door.”

Robbins said she would like to see the home become a place where scholars could come to study or as a tutoring center. Another possibility is a museum, possibly as an annex to the Jacqueline House, just west of the house in the 1300 block of Main Street. The Jacqueline House, the city’s only black history museum, presently holds some documents and artifacts of McAllister’s, she said.

“I would like to see the 1300 and 1400 blocks of Main dedicated to African-American history,” Robbins said.

McAllister was born in Vicksburg in 1899 and lived to be 96 years old. She never married and had no children.