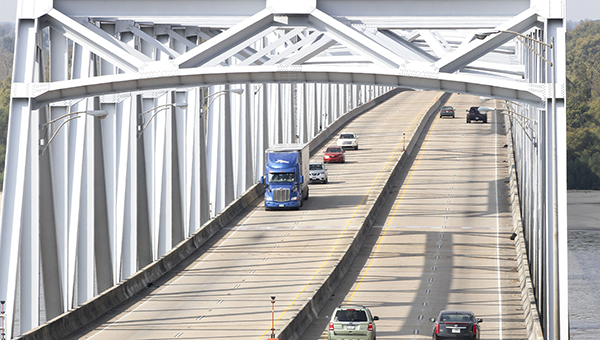 Traffic travels over the Vicksburg Bridge on Tuesday. AAA projects an increase in traffic over the upcoming week as families prepare for the Thanksgiving Holiday.

If you notice the gas stations and convenience stores around the Interstate 20 exits being a little busier next week, keep in mind next week is one of the busiest travel weeks of the month, and AAA predicts this year’s traffic to be even busier than most.

In their travel predictions released Tuesday, AAA projects 48.7 million Americans will travel 50 miles or more from home this Thanksgiving, an increase of one million compared to last year.

And, AAA expects this Thanksgiving travel season, which begins Wednesday, Nov. 23 and ends Sunday, Nov. 27, to be the busiest Thanksgiving week since 2007.

AAA said the expected increase is tied to improvements in the economy during the second half of the year, including rising wages, increased consumer spending and “overall strength in consumer confidence.”

And while there are many ways to travel, driving remains the most popular.

Of those traveling this year, 89 percent are expected to drive, which is a 1.9 percent increase over last year. Air travel is also expected to increase, with a projected 3.69 million Americans flying to their holiday destination.

Also driving the increase, is the improvements in gasoline prices over the past year.

This Thanksgiving gas prices are the second-cheapest in nearly a decade.

In Mississippi, the average price for a gallon of gasoline is $1.98.

When they are gone, they are gone. That is the word officials with Warren Central High School and the Vicksburg... read more