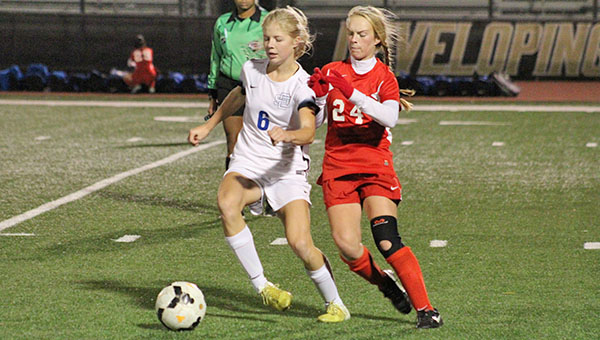 FLOWOOD — It only took 10 minutes for Warren Central’s girls’ soccer team to have a long night.
Ocean Springs put its first three shots into the net in the first 10 minutes of Friday’s game, and went on to beat the Lady Vikes 5-0 at the Northwest Rankin Tournament.

Warren Central (3-4-1) was playing its third game in three days — it has been shut out in all three — and has one more Saturday afternoon against perennial state power Tupelo. Coach Jay Madison said the mental and physical fatigue of a busy week played into Friday’s bad start and the final outcome.

“We really were not ready to play when we got off the bus. That’s poor coaching,” Madison said, putting some of the blame on himself. “Another thing was three games in three days is just tough. We felt like once we got going, it was better.”

Ocean Springs (4-2-1) scored all of its early goals from close range, and all in a hurry. Kayley Fountain headed in a corner kick in the fifth minute for the first goal, and Haley Roll got the second from about 8 yards out two minutes later. Ameris Taylor finished the early flurry by scoring from 6 yards out in the 10th minute.

“It was just being tired. It was hard to get mentally going. Physically, they were moving, but mentally they weren’t there. That’s coaching,” Madison said. “We just were not sticking with our marks. And that’s mental. That’s just the commitment to doing it and being ready to go.”

Warren Central settled in after the bad start, and Ocean Springs also seemed to take the opportunity to work on some things. Ocean Springs didn’t score again until Lindsay Charlton got two quick goals in the 67th and 70th minutes. The game took on a mundane flow in the midfield, with neither side making major sustained pushes toward the goal.

Warren Central didn’t have a shot on goal in the game. Ocean Springs had 16, but only six of them came in the second half.

“They scored two or three early goals and then the girls took a little pride in what they were doing and made it where they didn’t score any more until the second half,” Madison said.

Mikayla Banks had her fourth multiple-goal game of the season, and now has 18 in just six games. The six-year starter has scored 129 goals in her high school career.

Chance Williams scored two goals as Vicksburg (2-2, 2-0 Division 4-5A) beat Lanier for the second time in three weeks to get an early leg up in the division race.

Greg Hayden, Cardell Spencer and Sam Newton had one goal apiece for the Gators. The defensive line of Kevin Williams, Michael James, Christopher Williams and Damio Moore, Jr., locked down Lanier to earn the shutout.

STARKVILLE (AP) — No. 3 turned Clinton into No. 1. Cam Akers ran for five touchdowns and threw for two... read more