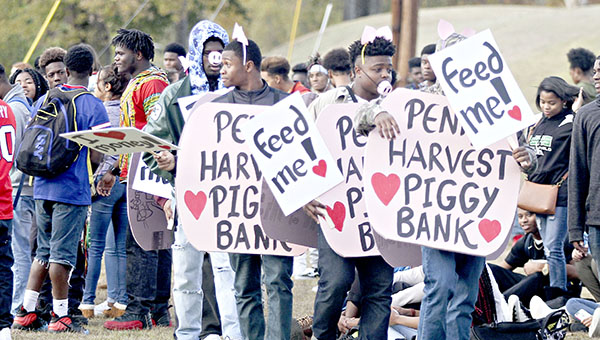 Students dressed as piggy banks walk around the Penny Harvest kickball game at Vicksburg High on Friday. All of the proceeds raised at the event go towards the Warren County Children's Shelter.

The Warren County Children’s Shelter is hoping to break the bank — the piggy bank that is — during its annual Penny Harvest drive.

For the past 25 years, the shelter has held the event in an effort to raise funds to help meet the needs of the children who reside in the shelter, program director of the Warren County Children’s Shelter Cindy McCarley said, and this year things are going to get a little more porky.

“This year, we are embracing our Penny Harvest in a more festive manner. Thanks to Dr. Tameka Henderson, assistant principal at Vicksburg High School and the creative genius and hard work of the VHS art teachers and the Honor’s Art students, we are introducing the Penny Harvest Mascots, McCarley said.

The teachers and students have worked tirelessly to create 10 Penny Harvest Piggy Banks costumes, and during the nearly two-week long fundraiser, the mascots will go and visit all of the public and private schools at various times during the event.

On Friday, the piggys made their debut during a kickball game held between VHS teachers — kicking off the start of the fundraiser.

The 10 piggys stood on the sidelines oinking for the teams.

VHS football player Nick Anderson was of the 10 mascots and said he was happy to be dressed as one of the piggys and to be participating in the fundraiser.

“I like to help people and to support my school,” Anderson said.

Ninth grade student Moesha Pam said she was having fun at the kick ball game and was rooting for the grey team.

“I want the gray team to win because I have three teachers playing on that team,” she said.

The idea of holding a kickball game as the kickoff to the Penny Harvest, Henderson said, was something she thought could benefit both the teachers and the students.

“And I thought this would be a great way to donate to the shelter while also being entertaining,” Henderson said.

In addition to the kickball game, McCarley said VHS has also challenged Warren Central High School to see which school can bring in more bacon.

The Penny Harvest will run through Dec. 16, and for the class who raises the most money at each of the elementary schools, the children will receive a party, McCarley said.

“In January, Wendy’s will donate kid’s meals to each school’s winners,” she said, and a trophy will be awarded to the school that raises the most money.

“Both public and private schools compete for the sought after Overall Penny Harvest Trophy,” McCarley said.

“The reward though, actually comes in the inspiring acts of little ones embracing the value of paying it forward and realizing that those that they often considered “the least of these” will never go without because of the compassion and generosity. No one understands that better than our staff. They have the honor of putting that money into action as daily we touch, feel and experience the value of a penny,” McCarley said.