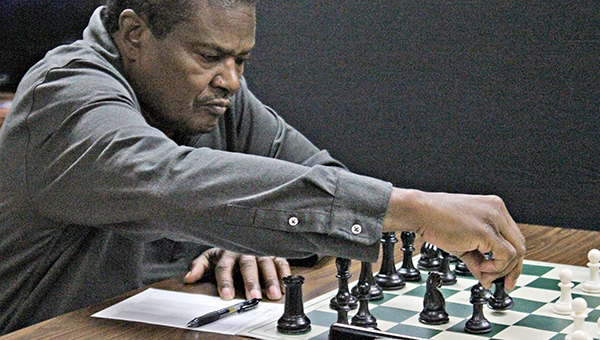 Johnny Guinn and Jackson Floyd took some playful jabs at each other for the camera, both verbal and physical, then sat down at a table Saturday in the City Hall Annex to hash out the real issue.

There was no debate, just silence and concentration as they carefully maneuvered their pieces into place. In about 30 minutes it was all settled — despite Floyd’s efforts, Guinn is still the best chess player in Vicksburg.

Floyd and Guinn met in the championship match of the 7th annual Vicksburg Warren Closed Championship, the tournament to crown the best among the approximately 50 members of the Vicksburg Chess Club. Guinn won it for the fifth time.

“I think he spit on the floor and I slipped in it,” Floyd said with a laugh. “He had some kind of game plan. We played yesterday and I beat him three games in a row. Today was his day.”

This year’s tournament featured six of the club’s best players. They played a preliminary round last week and the last two players, Guinn and Floyd, came back Saturday for the championship match. The two men sat at a table with a television camera perched overhead that recorded the action and simulcast it into the boardroom at City Hall.

Commentary will be added to the match later and it will be broadcast on the City of Vicksburg’s TV-23 cable channel.

The 70-year-old Guinn has played chess for 44 years. He learned the game from a fellow Vietnam veteran when they were on their way home from the war and loved it immediately.

Guinn taught friends and family members how to play, and won the Mississippi state championship in 1982. Even after all that time, he said, the game still appeals to him because of the limitless possibilities in each match.

“I’ve been playing 44 years and every time I play I learn something new. It’s like life that way,” Guinn said.
That was the way it went in Saturday’s championship match. Although Floyd had cleaned Guinn’s clock the day before, things quickly went off the rails for him shortly after they sat down in a small room adjacent to the boardroom in City Hall.

In tournament chess, each player has a time limit to make all of their moves — in this case 45 minutes. They start and stop a time clock on the table at the beginning and end of each turn to measure the time. If there’s no winner when time runs out, they play a shorter, faster-paced game to determine a winner.

The timing element adds pressure, Floyd said, and often forces inexperienced players into mistakes. Even though he’s been playing for about 30 years, he said he falls right into that category.

“It’s more pressure because you’re sitting there thinking about what you should do and not doing what you should do,” Floyd said. “I played a tournament in Pearl last year and there was a 10-year-old that beat me. I’m not experienced enough to hold on to what I should hold on to.”

Saturday’s match could have lasted a total of 90 minutes, but Guinn only needed about 30 to win.

Floyd lost a bishop and his queen early in the match and was playing catch up after that. He never could, and his white pieces piled up along the side of the table as the right side of the board cleared out. Guinn earned a checkmate by trapping Floyd’s king along the back row with a combination of two rooks and a bishop.

“He made some bad moves and I took advantage of them,” Guinn said. “He played bad. It wasn’t because I played great. But that’s the name of the game, is taking advantage of the other player’s mistakes.”