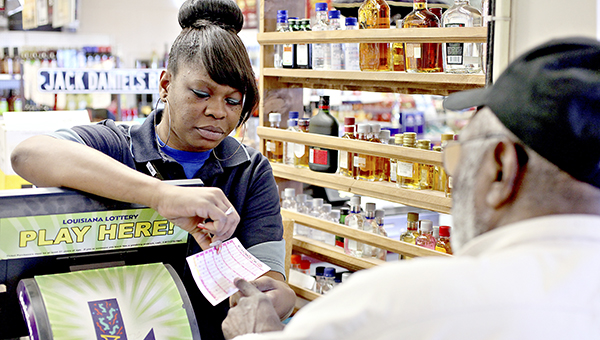 HEDGING HIS BETS: Cashier Casaybre Royal helps one of dozens of customers in February 2015 buying lottery tickets at Delta Discount Wine and Spirits in Delta. Many Mississippi residents made the drive across the river for their chance at the estimated $485 million Power Ball payout. Gov. Phil Bryant Tuesday called on Mississippi lawmakers to create a state lottery.(Justin Sellers/The Vicksburg Post)

JACKSON — Gov. Phil Bryant told lawmakers in his State of the State speech Tuesday night that it might be time for Mississippi to create a lottery as a way to generate revenue without raising taxes.

His proposal was met with only a smattering of applause.

Mississippi is one of six states without a lottery, according to the National Conference of State Legislatures. Several proposals to create a lottery in the Bible Belt state have died during the past two decades, usually with little or no debate in the Legislature. Bryant himself has been elected with the support of conservative religious groups that oppose the games of chance, but he said several months ago that he would be open to discussion about the issue.

Bryant said Arkansas received $80 million from its lottery last budget year — some it from tickets bought by Mississippi residents.

“When we see traffic crowded on the Mississippi River bridge taking revenue to our neighboring state, it may be time to face a new reality,” Bryant said. “We can no longer contain the people’s desire for a lottery; we can only force them to travel.”

Bryant, 62, began his career as a deputy sheriff and is starting his sixth year as governor. He said he will support “Blue Lives Matter” legislation. At least four bills would strengthen the penalties for attacks on law enforcement officers. Bryant mentioned the Mississippi Bureau of Narcotics agent Lee Tartt, who was killed and three other officers were wounded in a February 2016 shootout during a standoff with a man holed up in a house near Iuka.

“Across our nation, law enforcement is under attack,” Bryant said. “Here in Mississippi, most of our citizens continue to support and respect the men and women who wear the badge and protect and serve.”

Mississippi in 2017 is marking 200 years of statehood, and Bryant called on the public to take part in bicentennial events.

“Like most nations and states, Mississippi has had trials and tribulations that cannot be forgotten or excused,” Bryant said. “But, we also have a rich history that should be celebrated by us collectively.”

As he has in many other speeches, Bryant bragged on job creation, including the development of a Continental Tire manufacturing plant that is being built outside Jackson and a Raytheon plant that is being developed in Meridian to build training jets.

He said his top priority for his remaining three years in office will be to improve Mississippi’s struggling foster care program. He also called on lawmakers to be frugal with the budget, including setting aside money to replenish the rainy day fund that provides a financial buffer when the state economy lags. Bryant has already cut the $6.4 billion budget twice since the current fiscal year started July 1.

He also asked lawmakers to eliminate at least 16 existing state boards that haven’t met in more than a year, but he didn’t name them.

Bryant noted that his wife, Deborah, could not attend the State of the State address because she was feeling under the weather.

“I can only assume that she is sick of hearing me make speeches,” he deadpanned.

By EMILY WAGSTER PETTUS The Associated Press   JACKSON — Mississippi Gov. Phil Bryant is telling lawmakers it might be... read more