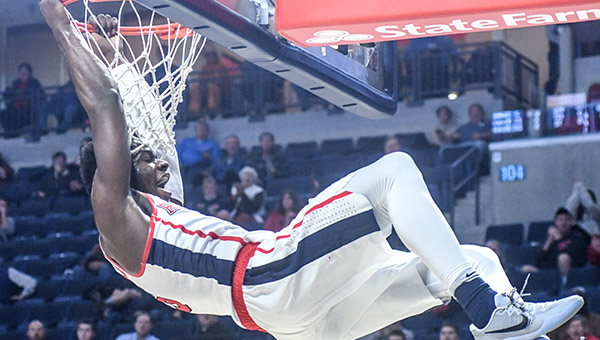 OXFORD (AP) — Ole Miss watched a teammate fall, and then pulled it together in the second half to overcome some adversity and a big deficit against Tennessee.

Terence Davis scored 20 points with 11 rebounds as Ole Miss closed with a 12-2 run in the final three minutes Tuesday night to defeat Tennessee 80-69.

“We really needed it. We were desperate for a win,” Ole Miss coach Andy Kennedy said. “Our roster is really limited by injuries but we played with energy and I’m pleased with how we closed this game.”

Ole Miss guard Rasheed Brooks, after collapsing from a seizure during a timeout with 17:21 remaining, was listed as stable at the Baptist Memorial Hospital-North Mississippi in Oxford.

Ole Miss spokesman Daniel Snowden said he “couldn’t comment” about Brooks’ medical history when asked if Brooks had a history of seizures.

Brooks, a 6-foot-5 junior from Kalamazoo, Michigan, is averaging 8.4 points per game this season. Brooks started Tuesday but did not score a point in 15 minutes of playing time. He had three rebounds and one assist.

“It’s my understanding he is stable, conscious, but he does not remember anything and he is still going through tests,” Kennedy said in the postgame press conference. “It was a frightening moment for all of us and our prayers are with him. I turned my back and felt him fall against me, but I thought it was cramps. We were emotionally devastated to see Rasheed suffering and it was hard for our players to go back out there.”

Robert Hubbs III and Lamonte Turner scored 15 points apiece for Tennessee (9-9, 2-4). Jordan Bowden added 14 points as the Vols finished 25-of-71 (35 percent) from the field, including 10 consecutive misses to close the game.

“When they punched back in the second half, we didn’t punch,” Tennessee coach Rick Barnes said. “They played harder. They played with passion. No ifs, ands or buts about it, this was a total Tennessee team loss.”

The Vols squandered a 52-39 lead with 15 minutes remaining and have lost four of the last five games. Tennessee forced 17 turnovers and grabbed 17 offensive rebounds, but faded in the final 15 minutes.

“I never really felt like we were in control with 15 minutes left,” Barnes said. “But they took it to another level.”

Saiz leads the SEC with 12 double-doubles, ranking him sixth nationally. Saiz is one of only six players in school history with at least 1,000 points and 800 rebounds.

The Rebels won without leading scorer Deandre Burnett, who was sidelined by an ankle injury, and lost Brooks early in the second half.

The Rebels struggled early with a top-heavy SEC schedule, but have three of the next four games at home, including a critical non-conference match with No. 6 Baylor.

Ole Miss is on the road Saturday at Missouri, and then returns home to face Texas A&M, Baylor and archrival Mississippi State at The Pavilion.

“We don’t have a lot of bodies right now,” Kennedy said. “Our hope is that Deandre (Burnett) is responding better every day and that he will be back with us sooner than later if he doesn’t have any setbacks.”