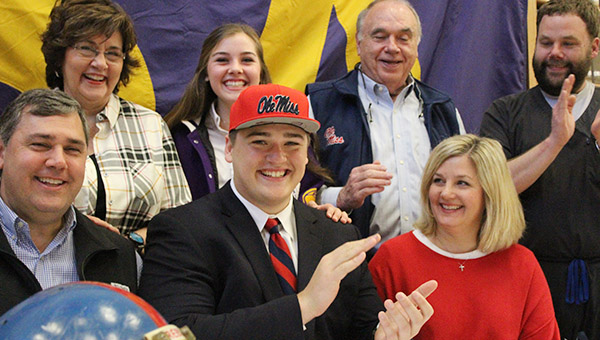 Surrounded by his family, St. Aloysius offensive lineman Ben Brown claps after signing with Ole Miss on Wednesday. Brown will become the seventh member of his family to play for the Rebels. (Ernest Bowker/The Vicksburg Post)

Just before 8 a.m. Wednesday, Ben Brown sat down at a table in the St. Aloysius High School library for a ceremony celebrating his signing with Ole Miss. Including the congratulatory handshakes and mingling, it only lasted about 30 minutes but it was generations in the making.

Brown, St. Al’s 6-foot-5, 290-pound offensive tackle, made good on the verbal commitment he made a year ago by sending Ole Miss his signed national letter of intent. He’ll become the seventh member of his family to play football at Ole Miss, following in the footsteps of his father, two grandfathers, two uncles and one great uncle.

“I’m very grateful for the opportunity, and just having all my family’s support through all of this,” Brown said. “They didn’t care where I went. They would have supported me no matter where I would have gone. Just knowing they were going to have my back through the whole recruiting process, and now through college and the rest of my life is something amazing.”

In addition to increasing his family’s legacy, Brown continued a recent St. Al tradition of sending players on to the next level. He’s the school’s second Football Bowl Subdivision signee in three years, and it marks the third consecutive year the program has produced at least one college player.

Brown was St. Al’s lone signee this year, and head coach BJ Smithhart said there are few players anywhere who have worked as hard to earn the opportunity to play Southeastern Conference football.

“He’s your ultimate dream as a coach. All the time in basketball you hear the term ‘gym rat,’ and that’s what he is with football,” Smithhart said. “He works out every day. Then he’ll go and do drills on his own and find people to work with. There’s no telling how many camps he’s been to. He just wants to perfect his craft. A lot of kids, once they get that offer, they want to slow it down. Not Ben. He probably went to even more camps because he knew he still had work to be done. That’s one thing with Ben. He realizes this is the beginning.”

Brown was a four-year starter at right tackle for St. Al. He helped the Flashes reach the MHSAA Class 1A championship game as a sophomore in 2014 and continued to be a dominant force on the offensive line all the way through the end of his high school career.

Brown was rated as a consensus 3-star prospect by all of the major recruiting services. He was ranked as the No. 1 offensive tackle in Mississippi by Scout.

Brown was one of two offensive linemen to sign with Ole Miss on Wednesday, along with fellow tackle Tony Gray of Loganville, Georgia.

He received a half-dozen offers from FBS programs just after signing day in 2016, but said he didn’t need a lot of time to settle on Ole Miss.

“I thought about it for a night or two, just to actually process what had happened. I talked to my dad and he said, ‘Come on. Let’s just call (Ole Miss assistant coach Matt) Luke already,” Brown said. “I called him two days later and haven’t looked back from that decision yet.”

Although Brown’s family ties played into his decision, both he and his father said everyone involved made it clear that it wasn’t an obligation. Tim Brown said Ole Miss’ coaches stressed that they wanted his son to play for them because of his talent and not his last name, while family members did their best not to pressure Ben into going to Oxford for the same reason.

“We made it clear this was his choice and his decision. Of course we wanted him to go to Ole Miss, and he knew that, but we didn’t put pressure on him,” Tim Brown said. “The coaches assured us that they were not offering him because of the legacy, which we’re very grateful for. Ben was very humbled to get an offer from them. We feel like they’re one of the best schools in the SEC, and he couldn’t be playing for a better group of Christian men and coaches.”

That hardly meant the family wasn’t thrilled with the decision, however.

“Are you kidding me? Relieved,” Tim Brown added with a laugh. “It means a lot, because it reconnects us with Ole Miss and brings back a lot of memories for me. It’s brought us back closer to the Ole Miss family. It’s going to be an exciting time.”

About an hour after he quietly faxed in his signed letter of intent at 7:01 a.m., Ben Brown and his family gathered in St. Al’s library for a more formal ceremony.

Brown led his classmates in a “Hotty Toddy” cheer and then posed for pictures with three generations of Rebels — himself, his father, and his grandfathers Allen Brown and Bobby Robinson. On the table in front of him was the baby blue Ole Miss helmet his father wore in the late 1980s.

It was a perfect way, he said, to celebrate a journey that’s just beginning.

“It feels absolutely amazing. I can’t even describe all the emotions that are going through me right now. It’s an unbelievable experience,” Brown said. “Having my family, close friends, classmates, coaches all around me made this moment perfect.”

The six Vicksburg High School football players gathered in the school library were symbolic of the program the past couple... read more