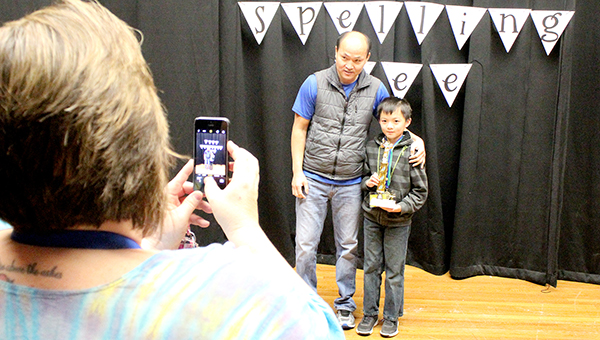 For six rounds, 11 students competed to find the best speller in the Vicksburg Warren School District until it came down to the final two contestants and the word “boulevards.”
Vincent Dang, a fourth grade student at Beechwood Elementary School, whose mascot is the bee, spelled that word correctly and became the champion of the 2017 Vicksburg Warren School District Spelling Bee Thursday at Bowmar Elementary School.
The competition was open to fourth-through eighth-grade students who won their school’s spelling bee. Since Dang is a fourth-grade student, he was one of the younger contestants.
“This is my first time,” he said.
Dang’s father, Gam, was in the audience to watch and took photos with him after the spelling bee.
Overall, Dang said he was nervous, but felt the spelling bee went great. He started studying soon after he won his school’s spelling bee before the Christmas break.
“(I practiced) for a few months,” Dang said. “It took some time to study.”
Next, he will compete in the state spelling bee in Jacksoin on March 14.
In Thursday’s contest, five students made it through the first spelling round, and two students, Dang and the Academy of Innovation’s Ashlynn Palmer, made it through the second spelling round. Then came the two vocabulary rounds where both finalists breezed through.
The competition continued with two more spelling rounds, and Dang was declared the winner in the sixth round of competition, the fourth spelling round, after spelling both “petrifying” and “boulevards” correctly.
“You have to spell your word correctly in the last round and then you have to spell a championship word to be declared the VWSD Spelling Bee winner for 2017 and win that lovely trophy,” coordinator Dana Tankersley said to the contestants at the beginning of the competition.
She said the event went well, and she was pleased with the competition, even though she felt the words were challenging. On a list of 150 words, Tankersley said the first 75 were much more difficult than the last 75.
“I felt like the first set of words was a little intimidating to start with, but that’s not up to us,” she said, adding Scripps National Spelling Bee sends the book of words. “This is the district list in order.”
Students were allowed to ask the announcer to pronounce the word more than once, for alternate pronunciations, country of origin, definition and to use it in a sentence. Students were expected to not hesitate, and instead were to start asking questions or start spelling after they were given the word. They were allowed to restart spelling after they started as long as they didn’t change any of the already spoken letters.
In the vocabulary rounds, the students could ask for the spelling if it had a homonym and were given two possible definitions for contestants to choose between.
Palmer was the second runner-up last year when she was a student at Beechwood.
Other participants were Jesse Parker of Bovina Elementary, Ryan Hadley Grey of Bowmar Elementary, Ariel Uzzle of Redwood Elementary, Jordyn Turner of South Park Elementary, Corshaun Turner of Vicksburg Intermediate, Jordan Johnson of Vicksburg Junior High, Daisha Brown of Warren Central Intermediate, Aubrey Ruby of Warren Central Junior High and Taegen Thompson of Warrenton Elementary.

A series of nighttime visits by people to the Vicksburg Warren-Humane Society on U.S. 61 South is forcing director Georgia... read more