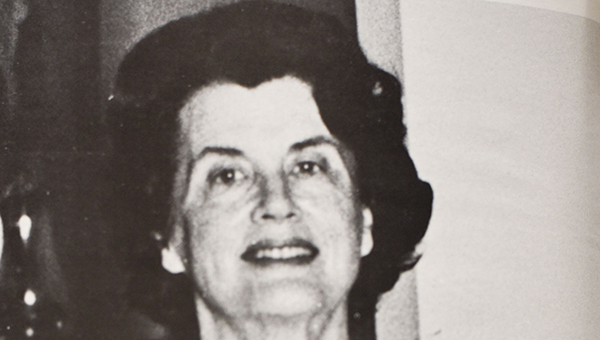 The journey of 100 years is one many don’t get the chance to experience.

A woman with an arsenal of stories and experiences throughout her years, now spends her time at home, legally blind and bedridden, but her daughter, Sheila, spoke about the tremendous force that is her mother.

“She could be pretty strict sometimes. She wasn’t going to put up with anything. But she was so supportive that it made up for the other things,” Sheila said. “But you knew when she spoke, you’d better jump.”

For more years than Sheila could count, her mother taught Latin and the occasional English class at All Saints Episcopal School in Vicksburg.

At the time, she said teachers couldn’t get married. When Leila met her husband, Joseph, a dentist, at the end of her first year teaching and she quit her job. But after having children, Lelia was able to return to her beloved profession for many years, influencing a great portion of the Vicksburg population.

“She has students that she had at All Saints who are now grandparents themselves who still write her and call her at Christmas,” Sheila said.

In addition to teaching school, Leila also taught ladies Bible classes in her home and Sunday school at First Presbyterian and Westminster Presbyterian churches for years. Sheila said one of her mother’s students attended Princeton and later went to theology school, eventually becoming president of Westminster Theological Seminary in Philadelphia.

“She has taught Sunday school and influenced young people ever since I can remember,” Sheila said.

In addition to educating the youth of Vicksburg, Leila was also active in civic organizations.

“She was the first woman on the board of the YMCA among other things, but she loved her years of teaching best. The only other thing in her life that I would compare with that is her love of Jesus Christ,” Sheila said.

She said her mother often asks her to read the Bible to her in the afternoons.

Lelia also always made sure she was there for her three children — Pete Stone, Margaret Tohill and Sheila — attending all of Pete’s basketball games and Margaret’s theater performances, Sheila said. Lelia has three grandchildren and one great-grandchild.

After Leila’s retirement from All Saints, she spent two years filling in as a Latin teacher in the Vicksburg Warren School District. She then spent two years teaching voluntarily at St. Aloysius High School in order to make sure her granddaughter would learn Latin in school. At that time she started developing macular degeneration and became concerned about her sight and stability when walking in the halls.

After her first year at St. Al, her granddaughter moved to Clinton, but Leila finished out a second year teaching at the Catholic school so the other students would get two years of the foreign language.

“She knew her Latin. She didn’t need to read,” Sheila said. “Not only did she know the language itself, but she knew the history.”

Sheila followed her mother’s career path becoming a teacher at All Saints, not necessarily on purpose, but because she grew up surrounded by the subject matter daily and found it natural. When Sheila’s father died, she quit teaching for a while. But then Leila started her teaching stent in the public schools, and it reminded Sheila how much fun teaching could be. She restarted her career teaching at Vicksburg High School and eventually at Chamberlain-Hunt Academy. As for what Sheila taught, she had a simple answer, “English and Latin, what else?”

Leila was born Feb. 1, 1917, in Washington, D.C. She grew up in St. Louis and Vicksburg because of her father’s job with the U.S. Army Corps of Engineers, Sheila said, and she graduated in 1933 at the age of 16 from Carr Central High School.

“She was the youngest member of her class,” Sheila said.

After high school, Leila went to Sophie Newcomb College in New Orleans where she studied English and Latin. During her time in New Orleans, talent scouts from MGM came to the area and picked three girls, including Leila, to audition for the role of Scarlett O’Hara in “Gone with the Wind,” but her father wouldn’t let her go.

“He was not going to have anybody in Hollywood in his family,” Sheila said.

After college Leila came back to Vicksburg because her mother was undergoing surgery, and she got the job at All Saints. In her prime, Sheila said Leila loved to read, travel, was in the Daughters of the American Revolution, kept up with stocks and did her family’s income taxes.

Now, Sheila said she takes care of her mother, and her mother has made it as easy as can be on her.

“She’s easy for me to care for because I have been with her at every step. I’ve watched her go from something active and vigorous to what she is now, and she has shown a loving spirit. With everything that happened, losing the eyesight and losing the power to walk, she has never, ever complained, she’s simply accepted. I don’t know too many people who would do that,” Sheila said.

A birthday party will be held for Leila from 3 to 5 p.m. Saturday, Feb. 11. Friends and family are invited to call or visit the house.

“All family is invited,” Leila chimed in.

Sometimes change can bring about peace

With each new president, the country ticks a bit differently, because typically each administration has their own way of doing... read more