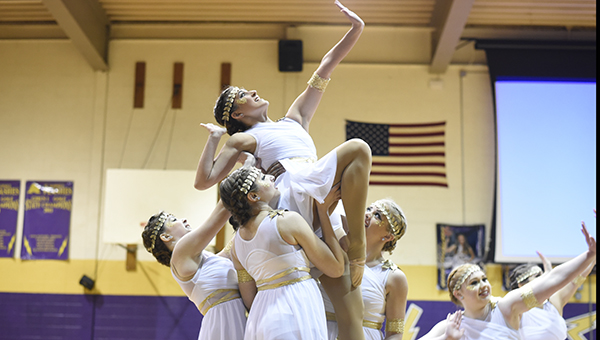 The St. Aloysius High School Flashettes dance to 'In The Name of Love' during a demonstration on Tuesday morning. The Flashettes will be competing in the 2017 National Dance Team Championship at Disney World in Orlando, Fla. on Feb. 3 through Feb. 5. This is the first team to actually travel to the championships. The Grecian Goddess themed dance was choreographed by So You Think You Can Dance's Brandon Bryant (Courtland Wells/Vicksburg Post)

A team of 14 St. Aloysius High School students are using their love of expressive movement and a competitive spirit to perform on a national scale for the first time.

The St. Aloysius Flashettes traveled to Orlando this weekend for the 2017 National Dance Team Championship at the Walt Disney World Resort.

While the Flashettes have qualified for the competition before, this will be their first ever appearance at the nationwide competition. Over the summer the Flashettes attended a Universal Dance Association Camp on the Louisiana State University campus where they placed first out of seven teams, putting them in position to move to the national competition.

“Last year we also placed first place with our home routine, but this was the first year we were able to make it happen because there is so much that goes into sending a team to nationals,” said director Chesley Sadler Lambiotte, listing fundraisers, time, focus, determination and energy as some of those elements needed to get there. “Once we got that first place trophy at camp, it set the ball rolling to get us there.”

In preparation for the competition, the team had a routine created specifically for them and the competition. “So You Think You Can Dance” runner-up and choreographer Brandon Bryant worked with the Flashettes personally.

“He came in and worked with the girls one-on-one, watched them, saw how they moved and then put a custom piece of choreography together for the girls,” Lambiotte said. “It really was such an experience. It was almost like the girls were able to have a master class to learn from somebody of his caliber.”

The teams’ costumes were also made custom with help from a team member’s mom. The white, Grecian style costumes illustrate the dance’s theme of Greek goddess. The girls’ makeup follows the theme with gold leafing outside their eyes. They even wear laurel wreath headpieces that Lambiotte found on a trip to New York City.

“It’s been a long time coming, and it’s been a lot of fun putting it all together,” she said.

The two-minute contemporary jazz piece is to, “In the Name of Love,” by Martin Garrix. Lambiotte said the Flashettes are competing in the small group jazz category against 80 other teams in preliminary competition. The field will be narrowed to 40 in the semi-final competition and 20 in the finals, she said. Teams will be competing in small, medium and large groups in the jazz, pom and kick genres.

“It kind of feels like David and Goliath. A lot of these teams have been competing for 20 years, and this is our first time,” Lambiotte said. “We’ve done our research, and I feel like we’re really prepared.”

Practice began as soon as football season was over. The Flashettes have been practicing non-stop spending the holiday break, mornings, afternoons and weekends perfecting their moves. Being a part of such a high profile competition, the team wanted to give it their all and be completely prepared.

Lambiotte said that was especially admirable because many of the team members are active in multiple sports and clubs while also working to maintain their grades.

“It’s been challenging, but definitely rewarding,” she said.

The Flashettes held multiple fundraisers to help fund the teams’ quest to get to the competition, and Lambiotte was grateful for the help and generosity from the school and the community.

She is thrilled to be able to give her team the opportunity to step outside Mississippi and compete with teams from across the country. Lambiotte feels it will be a great experience for the Flashettes to meet these dancers and be part of the dance world.

“It’s the first time in our school’s history that we’ve ever attended a competition or an event on the national level,” she said. “It’s such an experience they will take with them forever. I’m so proud of them. They’ve worked so hard.”

Hope. Might. Intend. For many, these three words are considered passive. Phrases such as, “we hope” and “we might,” or... read more