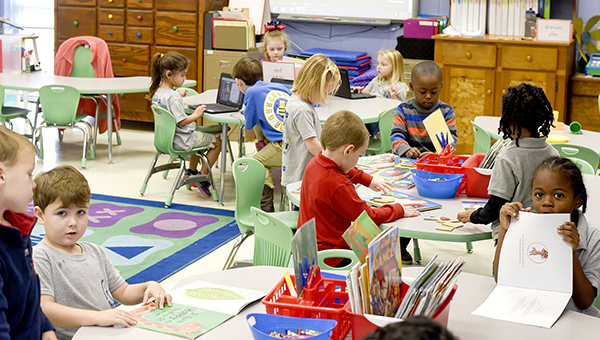 The Vicksburg Warren School District is looking at possibly relocating classrooms across the district.

With the addition of multiple pre-K classes to every elementary school except Bowmar, many of the aging buildings are bursting at the seams with students.

This has prompted the school board to start considering their options to ease the burden. The school board authorized a request for qualifications — an RFQ — for organizing community outreach.

“We do a list of qualifications that we are looking for to help us with a project. We put it out, and any company that meets those qualifications and wants to submit a proposal to service us in those areas is what that is,” Shaquita Burke, director of financial operations at VWSD, said. “We’re asking for qualifications for somebody to come in to be able to do community outreaches and do specs on what the community wants to see as far as growth and building improvements.”

Enrollment in VWSD is at 8,265, up by 330 students this year, superintendent Chad Shealy said.

At a called board meeting Thursday, the school board discussed multiple options for utilizing each facility.

“This is a work session to discuss some of the student population issues we have and changes in where people are living in our district,” board president Bryan Pratt said. “If we are going to address these issues, we need to find out what the community wants, find out what we need and find out what our options are.”

Discussion focused on the quality of the facilities and the age of the buildings, many built in the 1950s.

Issues with crumbling running tracks at both high schools, old air conditioning units needing replacement and the inability to implement any more technology because of the amount of energy needed, were all brought up during the hour-long meeting.

“There is not capacity within that building (Warren Central Junior High) to add more to the infrastructure so you can’t throw good money after bad,” Pratt said. “You have to decide at some point in time, do you build a new junior high?”

The choices the board makes will depend on enrollment, economic development, census data and most important, community input.

“Even if we don’t build anything, and we are just moving people around differently, I still want the community’s involvement,” Pratt said. “We need to find out what they think, what they want and also figure out what we can afford.”

The idea of building a new facility or possibly updating an old facility, like the Culkin School, were also options the board contemplated. Adding a second magnet school was an idea Shealy had so the district didn’t have to reject 150 students each year who apply to attend Bowmar.

Scenarios of separate ninth or sixth-grade academies to free up space in the elementary and high school buildings were brought up by people who have worked with districts across the state that have gone through similar evaluations.

“There are tons of options out there, and all of them don’t end in a bond,” Shealy said.

Board member Jim Stirgus Jr. also said the board needed to take into account having well-rounded student populations at each school when it comes to race. He wanted to make sure schools didn’t inadvertently become more segregated if there is an influx in population because of new job opportunities in the area.

“We may have to rezone,” he said. “When you do that, we’re going to make some people happy, some sad.”

“I don’t think we can plan for the future unless we plan with the board of education and with the board of supervisors because the common thread is the taxpayers,” Flaggs said. “I’m here to make certain whatever plan we are trying to prepare for the future, that it does include growth. There is a collaboration between good schools and good roads.”

Faith. Knowledge. Service. The motto of Vicksburg Catholic School was lived out through students, teachers, administrators and parents this week.... read more