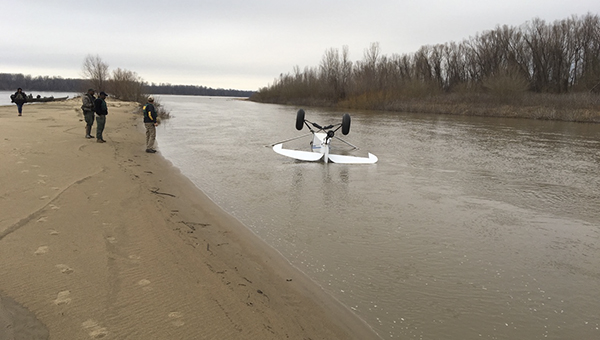 Man found alive after plane goes down near sandbar

A Utica man is recovering after his plane crashed Saturday afternoon near where the Big Black River meets the Mississippi River.

The pilot, Howard Jennings, 59, of Utica, was found safe early Sunday and transported to Merit Health River Region for what appears to be symptoms of hypothermia and dehydration.

“This is one of the few cases that I’ve been involved in where we’re searching for a down plane that actually has a happy ending,” Warren County Sheriff Martin Pace said. “Most often that’s not the case.”

The pilot’s family called authorities around 7 p.m. Saturday when they became concerned he had not returned from his afternoon trip over the river, and they said he never flew after dark.

Jennings had left from a private airfield north of Utica in a single engine Piper Supercub earlier Saturday.

“He’s an experience pilot with many, many hours flying,” Pace said.

Law enforcement used his cell phone to track his last known location, leading them to where the two rivers meet.

Since the plane took off from near Utica, the Hinds County Sheriff’s Office was also notified. Hinds County called in the assistance of the Metro One helicopter, the law enforcement helicopter out of Jackson.

The Coast Guard put out a bulletin notifying commercial traffic on the river to be on the lookout, and Coast Guard planes used searchlights to scan the banks of the river. They were unable to locate anything Saturday night however.

Sunday morning, the Warren County Sheriff’s Office took boats to Port Gibson near Grand Gulf and traveled north toward the mouth of the Big Black. At 8:30 a.m. the Metro One helicopter spotted the plane upside down in shallow water on the west side of an island in the Mississippi River near the Louisiana bank and saw Jennings walking around.

“He was cold and wet but otherwise OK,” Pace said.

The helicopter transported Jennings to River Region where he is being treated for hypothermia and possible dehydration.

After speaking with Jennings, Pace said the plane crashed around 1:15 p.m. Saturday just as the last phone signal was picked up. He was landing the plane and hit a high spot causing the plane to bounce and then flip over.

“It actually wasn’t even a hard impact. The plane does not even appear to be severely damaged,” Pace said.

The Vicksburg Warren School District is looking at possibly relocating classrooms across the district. With the addition of multiple pre-K... read more