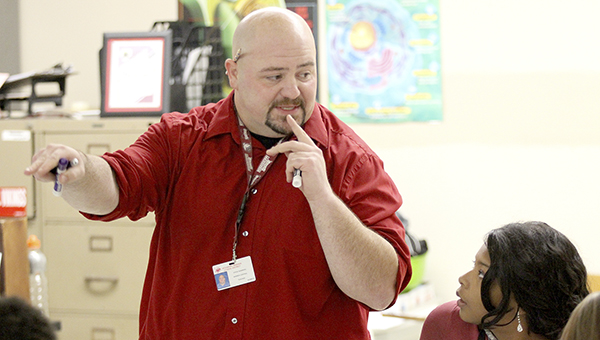 Steve Summers has a heart to help others through science and athletics.

The Warren Central High School biology teacher is representing the school as its Teacher of the Year. He is one of 21 teachers in the area nominated for the Vicksburg-Warren County Chamber’s Teach of the Year honors.

Summers always thought he would go into the medical field, adding his father is a preacher and his mother is a nurse. He planned to go to nursing school.

“I just wanted to help people,” he said.

While in college, he played tennis and spent time working with children on athletics for service hours, which sparked his interest in education.

“It really gave me the idea that that was something I could do well and something I really enjoyed,” he said.

Summers had already taken many science courses in preparation for nursing school, making his change of major to science education a smooth one.

“I already had a great deal of science under my belt,” he said. “It was a easy transition because of the pre-reqs that I had acquired for nursing school.”

In his classroom, Summers said he appreciates the opportunity to get to help children grasp a concept they had originally struggled with understanding. He finds value in the hard work it takes to reach success with a student.

“Before you get to those moments there is a lot of struggle and a lot of opportunities to quit, but when the light goes on, all the struggle, all the work and everything you put into it makes it worthwhile,” Summers said.

Having student participation in class is something Summers said is important, and he often implements cooperative learning strategies in his class. One way he does this is by having his students go outside and write down everything they see and then question their observations.

“Biology, and science in general, is the discovery of the living world around you,” Summers said. “I want my students talking about scientific principles.”

He also enjoys facilitating a cell organelles project where students move around the classroom to partner with their classmates.

“This incorporates a lot of movement and pairings of classmates who normally don’t work together,” Summers said.

In addition to teaching biology I, Summers leads the Health and Human Services Academy at Warren Central. The academy is one of three academies students choose to join their sophomore year that dictate the tone each of their classes will take the rest of their high school career and gives students a jumpstart on their chosen occupational field. He is also an assistant tennis coach.

Summers has his bachelor’s degree in education from Mississippi State University. During his senior year of college, Summers became the general manager of Old Venice Pizza Company in Starkville, and he worked there for four years. When he moved to Vicksburg, he started teaching and also became a service specialist at Roca Restaurant where he worked for five years while he taught.

“I teach because God gave me the responsibility of helping those in need,” he said.

Today’s story is the 15th in a series of articles on each teacher up for the honor of the Vicksburg Warren County Chamber of Commerce’s Teacher of the Year.

The Board of Mayor and Aldermen have hired a Jackson-based engineering firm to do the engineering and assessment of a... read more