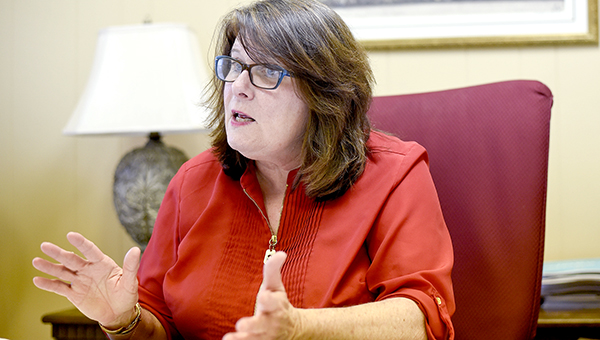 Flowers stepping down as director of Chamber of Commerce

Jane Flowers has decided it is time to stop and smell the roses.

The executive director of the Vicksburg Warren County Chamber of Commerce is retiring Feb. 22, after almost three years at the chamber.

She said the idea to retire came in October, when her daughter mentioned they never got to spend time together. That night Flowers made a list of pros and cons of reasons to continue working.

“I love this work that I do. I enjoy it so much. But I just wouldn’t mind a little piece of it, not the whole thing. It’s constant, it’s really busy,” she said.

With the port commissioner post open, Flowers thought the best thing she could do was to let everyone know her plans in advance in order to start preparing for the county’s future.

“As I saw it from my standing here at the chamber, I saw as small as we were we really needed to have a very united effort for economic development,” she said. “I thought that was one of the best things I could do because when else would you have the time of two heads open to give you some opportunities?”

Flowers has high hopes for the new position being created to encompass both former director positions.

“I think it’s going to be great all under one umbrella. But again, you can’t expect one person who gets a new job to save you. We all have to rally around, just like people rallied around me,” she said.

Flowers isn’t ready to completely leave public service and has hopes to continue to help out whenever she can.

“I still want to participate. I want to be involved, and I believe in the community and helping make Vicksburg greater. But for me right now, it’s time to go,” she said.

Flowers feels during her time at the chamber people have really come together to work towards making the community better by utilizing their strengths to promote Vicksburg. She feels it has been her greatest accomplishment as executive director to get people involved.

“I’m excited about what we’ve done here at the chamber. We’ve worked together. We’ve gotten people to come in and participate and talk together about issues and opportunities,” she said. “I think that’s really important because we need a lot of lay leadership in the community.”

Meeting those people who are giving back to Vicksburg has been her favorite part of heading the chamber these three years. She said the people here have been great to her, and working for the chamber has been one of the best times of her life.

“You see the people, and you see their hearts. You see what they want for our community, and to me its great,” she said.

Flowers has two grandchildren, three grown children and her 93-year-old mother who live in Vicksburg, and she wants to be able to spend more time with them. She is looking forward to having time to bake during the holidays, entertaining guests, tending to her garden again, becoming more physically active and keeping up her home that she loves. Flowers said time is worth money to her.

“If I’m not with them now, when am I going to be with them?” she said, adding her mother asked her a similar question when she had young children and was working. “She said, ‘You never get that time again, Jane.’ So I put that to thought, too.”

Before becoming the chamber’s director, Flowers worked for 30 years as the work-based learning coordinator on the Vicksburg-Warren Campus of Hinds Community College. She took two weeks off before starting at the chamber.

“I was perfectly content with my position at Hinds Community College. But it was my 30th year, and I thought it might be nice to try something new. At my age, I put my name in the hat, filled out my application and had an interview, and they called and hired me. It’s never too late,” she said. “I wish I would have had more years at this. It is a great opportunity, but like I said, I want to go home.”

Supervisor calls for Port Commission president to be ousted