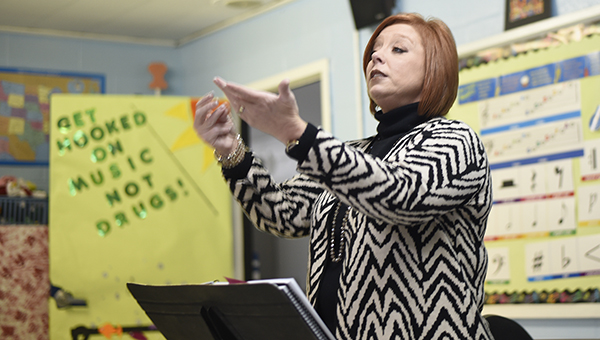 UP FOR THE HONOR: Porters Chapel music teacher and choral director Kristy Brumfield leads a recent rehearsal. Brumfield is one of the teachers nominated for Vicksburg-Warren County Chamber of Commerce Teacher of the Year honors.

Kristy Brumfield said the study of music connects students with the world around them because it is the universal language.

Brumfield is the kindergarten through 12th grade music teacher and choral director at Porters Chapel Academy and has been nominated by the school for the Vicksburg Warren County Chamber of Commerce Teacher of the Year honor.

Music, she believes, nurtures creativity and self-expression; teaches the benefits of collaboration, dedication and perseverance; and builds a sense of accomplishment, confidence and community.

“Because of the great benefits of the study of music, students become better thinkers, creators and global citizens,” Brumfield said.

At Porters Chapel, Brumfield teaches elementary music, upper elementary chorus, junior high choir, senior high choir and also directs the musicals. Her goal is to give her students a love and appreciation for music that will last a lifetime.

In her music and choral classes, she said many subjects are incorporated in her lessons like music theory, mathematics, history, world cultures, language arts and human anatomy. For example in language arts, she said figurative language and symbolism are used in music, which helps to reinforce critical thinking.

“Mathematics are woven into music lessons through the teaching of rhythms and note rest values,” she said. “When discussing periods of music history, students are also being taught world history through the discovery of events that impacted or inspired the composition of the music being learned…Musical phrasing is comparable to story arcs in literature…Identification of several of the muscles and physical systems used for correct singing as well as the process involved in correct singing reinforces science knowledge.”

Brumfield uses the Orff-Schulwerk method in her classroom, where students learn music by sound before sight. The method follows a process that starts with learning speech patterns, progresses to movement and then applies that foundation on an instrument or in a song. She received Level I Orff Certification from Mississippi College in 2001, and was the state chapter vice president of the Mississippi Orff Educators Association from 2002 to 2004.

“By following this method, all three of the major types of learners are engaged,” she said. “Auditory learners are absorbing sound patterns in speech and singing, visual learners are connecting the sound to the eventual addition of written melodies and rhythms previously heard, and kinesthetic learners are engaged through the use of body percussion such as clapping, tapping or snapping.

“Only after these steps have been followed do the students see actual notation for the rhythms or melodies they are playing or singing. Because they have heard the sounds and engrained them into their bodies, the melodies and rhythmic notations for these sounds are easier to understand.”

Brumfield said one of the most rewarding aspects of teaching music is performances. When she sees her students perform with emotion, she finds it moving and a privilege to witness. Each choral group forms a close bond working together on a shared goal.

“When we work together to reach the goal of a superior performance, we are no longer teacher and students — we become partners in the performances,” she said.

Brumfield said she considered becoming a music therapist when she was younger, but her involvement in honor choir her senior year inspired her to become a music educator.

“There was a moment during that honor choir where I just truly knew the Lord was telling me choral music was my path. From there, there’s never been anything else I’ve wanted to do than teach music and be a choir director,” she said.

Brumfield has a bachelor’s degree in vocal music education and a master’s degree in choral conducting from Mississippi College.

“I teach because the gifts and the calling of God are irrevocable. Romans 11:29,” Brumfield said.

Today’s story is the 16th in a series of articles on each teacher up for the honor of the Vicksburg Warren County Chamber of Commerce’s Teacher of the Year.