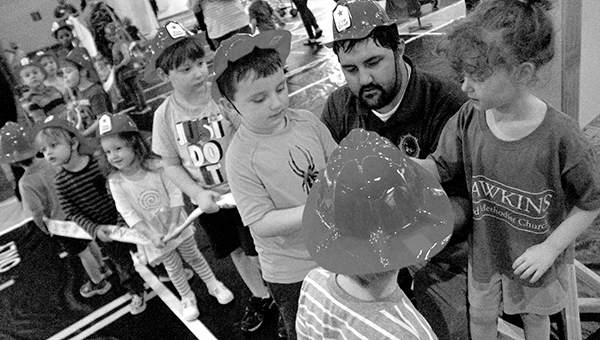 The temperature may be in the 70s outside, but a winter wonderland was discovered inside Hawkins United Methodist Church Wednesday night.
The church hosted a Trike Night event in a Winter Wonderland Village for pre-K and kindergarten students Wednesday in the church fellowship hall, or as it was known that night, the Mountain Lodge.
During the free event, the young students bring their tricycles and bicycles to the church, and they drive in a pint-sized village mapped out in the fellowship hall. There were extra bikes and trikes on-hand for those without a mode of transportation.
“This is just for preschool age, preschool through kindergarten, to bring their trike (or bikes) with training wheels, and the older kids are here as helpers,” program director Julie Townley said.
The winter theme lent itself to having a gingerbread house, a snowman bowling alley, a church, a police department and fire station in the little village. During the night a couple buildings in the village “caught fire,” and the children helped the firemen with his hose to extinguish the paper flames.
“They just drive around like it’s a regular town, and they’ll stop to do any activity. They’ll ice skate, they might come sled, they can do all that on their own,” Townley said.
There was a sledding hill, a winter arcade, a snack station with cookies and milk, a parachute blizzard and an ice skating rink where wax paper ice skates were worn to “skate” on the carpet. Giles Henry Parrish, 3, said he was having fun while ice-skating, and he wanted to go sledding again before he left.
“I slid on the hill,” he said. “Into pillows.”
Townley said the event was different than Vacation Bible School because it was targeted toward just the younger children, and because it was intended to be a night of fellowship instead of studying a Bible story and learning songs like VBS. However, she said a Bible story was offered in the village church for those who wanted to listen.
“This is about fellowship, getting to know each other,” she said. “The goal here is for them to come and have fun in a safe place, for people to come and be at home in the church without having worship.”
The event wasn’t just for church members, but was open to the entire community including the church’s preschool students. Church member Debbie Tate said hosting the event was a good way for the members to reach out to the community and invite them to the church.
Last year, the church hosted a Trike Night with a fall festival theme during October. This year,organizers wanted to do a similar event but switched up the theme for the winter season, especially because it doesn’t get very cold here. “We just thought we would have a new theme with new things for the kids to experience, and because we live in the deep south where today its 80 degrees, we just thought maybe some winter activities would be a change of scenery for them,” Townley said.
The church preschool also hosted a couple Vicksburg Police Department officers on their bicycles Thursday morning for a Trike-a-thon where the school raised money for St. Jude Children’s Research Hospital by riding their trikes.

River City’s Marshall: ‘I teach because it is my calling’

With a passion for young people and all things math and science, Karin Marshall teaches because it is her calling.... read more